One of the five South American representatives currently left in the World Cup will meet the lone remaining African standard-bearers in the second of the 2010 quarter-final ties, staged in the luxuriant surroundings of the Soccer City stadium in Joburg this coming Friday evening.

Uruguay came into the tournament bearing the ominous ‘dark horses’ tag, a tag that has been resolutely compounded by a highly-impressive start to their South African campaign.

The Charruas finished top of Group A with 7 points from a possible 9, beating lively hosts South Africa and a very able Mexico outfit along the way.

Strange as it may sound, the only blot on their copy book was a disappointing goalless draw with an abject France side that duly descended into meltdown following their opening game stalemate.

Oscar Tabarez‘s men advanced to the knock-out stages in relative comfort and found themselves pitted against the industrious, and surprisingly fluid, South Koreans.

A well-taken brace from the seemingly rejuvenated Luis Suarez, who had somewhat struggled to find his feet during the group stages, was enough to see his country progress past the Asian side and through to the last 8. 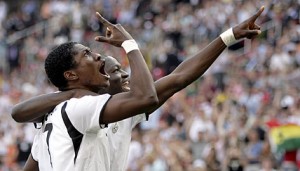 Ghana surpassed many objective spectators’ expectations by somehow making it through a potentially impassable Group D draw (that saw them competing with Germany, Australia and Serbia) despite not managing to score a single goal from open play and only harvesting four points from their opening three fixtures – mirroring their barren (but nonetheless efficient) performance at last season’s African Cup of Nations.

However, there was nothing quite so fortuitous about Ghana’s last 16 victory over the USA.

A first international goal for midfielder Kevin-Prince Boateng coupled with an extra-time winner from the stand-out African player at the World Cup so far, striker Asamoah Gyan, saw the Black Stars finally stamp some sort of authority on the tournament and deservedly book their place in the quarter-finals. 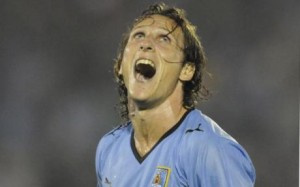 Uruguay are expected to name an almost unchanged side from that which saw off South Korea, in a bid to capitalise on both the current first-string’s high morale and their fluent attacking momentum.

However, defender Diego Godin will miss the Ghana game after suffering a thigh strain against the South Koreans, with Mauricio Victorino poised to step in – as he did when Godin limped off against the Taeguek.

Tabarez prefers to utilise an three-pronged attack, with creative source Diego Forlan sitting in behind (and just to the left of) Suarez and the often frustrating Edinson Cavani patrolling the right-hand channels.

With such a potent attacking forward line, the three deep-lying midfielders are rarely required to join in on forays forward – with erstwhile anchor man Diego Perez deployed to screen the already-solid defense, which he does with an almost military dedication.

It is this compact defensive rigidity, coupled with a very real goal threat, that has seen the South Americans progress with such efficiency.

In contrast, Ghana will face a couple of fairly major selection dilemmas, as both 19-year-old centre-back Jonathan Mensah and wide midfielder Andre Ayew are set to miss the quarter-final clash due to suspension.

Lee Addy and Isaac Vorsah are the two names mooted to be competing to fill the void left by Mensah, whereas Sulley Muntari (who has fallen out of favour with Ghana coach Milovan Rajevac, after struggling with disciplinary issues) is expected to earn his first start of the tournament by standing in for Ayew. 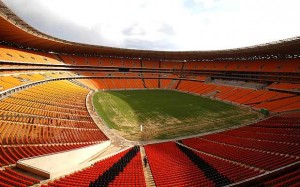 With both sides currently radiating positivity, it wouldn’t be unreasonable to suggest that there may be a wide-open encounter in prospect.

However, the truth is that Ghana have the knack of suffocating potentially effervescent opponents with a decidedly negative approach and dour, unadventurous defensive resilience.

With so much riding on the game, this can be forgiven – but it can be frustrating to watch knowing that they have the undoubted talent within their ranks to win any game outright, as they demonstrated so readily against the US.

Uruguay have a set system of operation and should (in theory at least) provide most of the game’s attacking highlights and, when you factor in their stout defensive capabilities, I reckon the smart money’s on the South Americans to make it into the penultimate round of a World Cup finals for the first time since 1970.

Diego Forlan and his teammates are favorites to win this one and send the last African contender packing. Uruguay is sitting on 2.06 to advance to their first World Cup semi-final since 1970. This might well be their best chance. Click here to bet on this and other World Cup games.

You can watch Ghana take on Uruguay live online as well as all other World Cup matches, plus hundreds of football games from around the world. Read our live World Cup football page for more details.