“GGOAL is a tactical/strategic browser game, where different players can experience a real challenge on a soccer chessboard of sorts.

The main feature of GGOAL is the appropriate management of the on-field players.

GGOAL is a multiplayer game in which the user builds a team including his or herself and other 5 players that he or she can move. Therefore, the user becomes the player and the coach at the same time!”

GGOAL already has 20,000 players signed up (at time of writing) and logged on which, given that the site has only been up and running for just over a month now, is fairly indicative of just how addicted you are liable to become as you attempt to build your fledgling minnows into world-beating goliaths one match at a time.

Signing up and creating your team:

Upon your arrival at the GGOAL homepage, you are instantly greeted by the strains of the embedded video tutorial kicking automatically into action.

The site is available in six different languages (Italian, English, French, German, Spanish and Portuguese), thus giving greater access to a wider audience – which can only be a good thing, right?

After getting a flavour of what GGOAL entailed via the tutorial video coupled with a quick leaf through the extensive ‘How to Play’ page, I decided to press on, sign up and ‘learn on the job’ as it were.

Signing up is as easy as filling out a form, verifying your details via email and assigning yourself a position, e.g. if you choose to check the ‘forward’ box, your name will appear in the ‘forward’ position in your ten-man squad…

After logging in, you can view your various club stats (i.e, stadium capacity, squad ability/morale, match records), the GGOAL league tables and a live ticker feeding all the latest scores across the top of your screen – as well as the option to enter the ‘waiting room’ and take on your first challenger.

Upon clicking ‘Play’ at the top left of the page, you will be spirited through to the waiting room and presented with a list of challengers and their requisite skill levels (an indication of how many GGOAL games they have won).

Naturally, I selected the lowest-skilled player available to go up against and entered the fray for the first time. 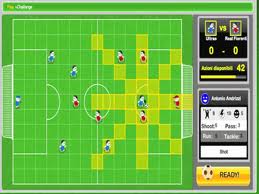 The game itself revolves around a top-down football pitch divided by a chessboard-style grid into ‘cells’.

Gamers use their turn time (the yellow bar on the right counts down with every ‘play’) to tactically pre-empt their opponents and either advance upfield or defend depending on whether or not they are in possession – with the object of the whole shebang being to finish the game (each match lasts for 45 ‘available actions’ i.e, turns) having outscored your challenger.

It seems like a lot to take in, and it can be a little baffling when playing for your first match (you should probably expect to lose!), but it doesn’t take too long to get to grips with the GGOAL’s gameplay system and the goals start flying in…

Whereas the graphics are a little on the simplistic, they don’t really detract from the actual game at hand – though the options panel (the grey block to the side of the pitch) takes a little bit of deciphering.

The more games you win, the higher up the GGOAL league table you’ll rise, the better your players and skill level become and the more little luxuries you’ll be able to afford to lavish on your club – not that I’d know anything about that, as I’m currently nursing a run of two heavy defeats in my opening two games!

GGOAL may well take you a couple of matches to fully acclimatize to, but becomes  ridiculously addictive soon after.