If you’re looking for the perfect Premier League fantasy football game to ring in the new season, FanXT’s Fantasy Premier League Commissioner could be the fix.

Besides picking your lineup and team name, you can create your own league and serve as a Fantasy EPL commissioner.

As commissioner, you have total control over your fantasy league – from what it is named, to the scoring system, to who plays. FanXT’s game will even give your league its own domain name, give the choice to set the price to purchase individual players, and decide on the budgets and transfer regulations for the players in your league.

No more restrictions – with FanXT, you’re in control.

Once you sign up for the website, you’re immediately set up with a step-by-step guide on how to commission your own league.

The website will take you through a five-step process where you set up your League, Rules, Scoring, Players, and then invite your fellow competitors and confirm your choices.

And therein lies possibly the most appealing thing about Fantasy Premier League Commissioner: The website gives you the ability to play against family, friends, schoolmates or coworkers, and engage in the kind of banter and trash-talking among these fantasy football managers that makes all games so much fun.

By playing people you know, the stakes are raised: It sure hurts a lot more to lose to your best friend than a stranger, and the talking points from the weeks fantasy matches will keep you talking until the next round of fixtures.

It’s advancements like these that have made American Fantasy Football a bigger weekly cash cow than the NFL itself. The ammunition of knowing exactly who you are playing against magnifies the entire experience.

After you have negotiated the simple and well laid-out window where you create your league, you are presented with the chance to customize your league’s home page, giving each setup a unique and new feel.

The customization of the homepage is exhaustive and ranges from choosing a background picture and logo, to creating your own page banners. Like all commissioners know, image is everything at times.

Each website also comes with a message board to bat volleys of well-intentioned insults back and forth before and after big matches.

Fantasy Premier League Commissioner also comes through when it comes down to the nitty-gritty: Picking your team. 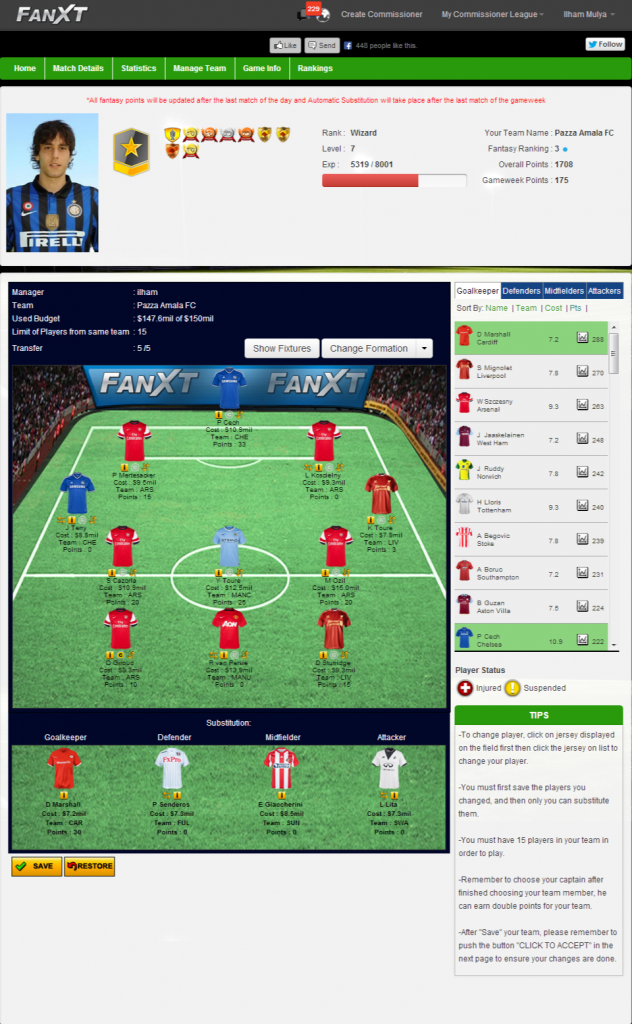 Along the theme of customization, you can also shape your formation to your own liking, whether you prefer the 3-5-2 or the 4-3-3.

It’s a must-try for all fantasy football managers this season. Or if you prefer the typical Fantasy Premier League, they to have a standard fantasy EPL game, http://fantasyepl.fanxt.com.