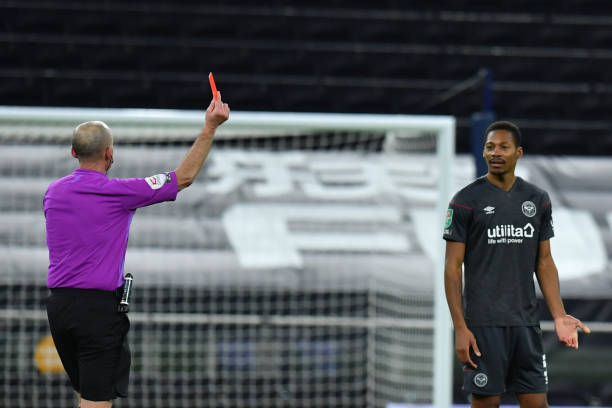 Tottenham Hotspur booked their place in the finals of the English League Cup following a hard-fought 2-0 win over Championship outfit Brentford last night, with goals from Moussa Sissoko and Heung-min Son getting the job done for Jose Mourinho’s side.

Spurs have a chance to win their first silverware in 13 years as a result, and they will be looking forward to the final at Wembley in April where they will meet either Manchester United or Manchester City.

Brentford had put four English top-flight sides to the sword on their way to the League Cup semis, and they were left to rue their luck after VAR ruled out Ivan Toney’s goal.

They thought they had equalised only for the Video Assistant Referee to chalk off the goal as the Brentford star striker was offside.

Son doubled Spurs’ lead a few minutes later, and the visitors’ woes were compounded six minutes to the end of regular time after Josh Dasilva was shown his marching orders for a rash foul on Pierre-Emile Hojbjerg.

The Tottenham midfielder was left with a gruesome gash as a result of the horror challenge, and while many will accept that Dasilva’s tackle was malicious, former Spurs striker Gary Lineker doesn’t think that the Brentford star really meant it.

The BBC Match of the Day presenter took to Twitter to react thus after the former Arsenal man was sent off:

Brentford wouldn’t have any complaints about Dasilva’s red card, but they would have felt some sense of injustice after VAR adjudged Toney to be in an offside position during his goal.

Thomas Frank’s men definitely gave Tottenham a run for the money, and they will now hope to secure top-flight promotion at the end of the campaign having come close last season and proven themselves against some of the teams in the Premier League.

Another League Cup final for José. And José doesn’t lose League Cup finals. He’s won nearly as many of them as the competition’s had names. Well played @SpursOfficial. Great effort from @BrentfordFC and very unlucky with a VAR decision that I’m not sure they can be 100% sure of.

Having comfortably defeated both Manchester sides in the league campaign this season, Spurs will fancy their chances when they come up against one of them in the final, and the League Cup could be returning to the club for the first time since 2008.