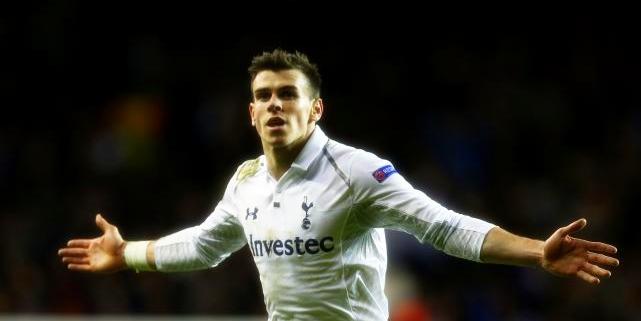 Gareth Bale, the darling of Premier League, is enjoying the form of his life this season and according to many the Wales international can only get better and better with time.

One can only wonder, if the “tip of an iceberg” can wreck such havoc in last few months, what it would be like when he develops into a complete package.

With 23 goals to his name, 13 goals in the last two months, he is undoubtedly one of the players of this Premier League season alongside Manchester United’s Robin van Persie and Luis Suarez of Liverpool.

Outstanding, world class, incredible, inspirational – are some of the common epithets used for him in recent months while critics have shown the temerity of comparing his heroics with the likes of two of the world’s greatest players – Cristiano Ronaldo and Lionel Messi.

“With great talent, comes great offers from big clubs” – that’s the new message of world football these days and on that point, it has become a great talking point of Bale’s future already.

One thing we have learnt from Spurs over the years that, it is almost next to impossible to out-haggle the North London club from the negotiation table. Daniel Levy, the chairman of Spurs has made a name for himself as not only a shrewd businessman but a grudging seller as well.

This is about a man who sold Michael Carrick and Dimitar Berbatov for £18.6 million and £31 million respectively to Manchester United, while last year Luka Modric was transferred to Real Madrid for around £30 million.

Spurs will try their level best to keep hold of Gareth Bale, even if they don’t finish in top four this season. If they do qualify for Champions League, forget about getting him in the region of £40-45 million; add at least £10-£15 million with that, if not more. They will tie him with lucrative contracts and will hand a “not for sale” fax reply if their targets are achieved.

How many clubs in Europe would be ready to pay that money for him? With Financial Fair Play rule coming into play, let us find out where his possible destinations could be if right offers come for him.

Anything and everything is possible when Madrid enters the transfer market. With Jose Mourinho almost resigned to leave in summer, the club should shake things up with huge financial investments and Bale could be their number one priority.

Heads are bound to spin, when calls from Spain comes flooding in your phone, unless a question of loyalty stands in between – a la Steven Gerrard.

If any player needs second invitation to play alongside the best player in the world in probably the best team around in Europe, either he has no ambition in his life or simply a scatter-brained fella. Neither of the two is applicable for Gareth Bale. Generating cash for the winger won’t be a big deal for Barcelona either.

Historically, negotiation has not been Sir Alex Ferguson’s biggest strength, still £55 million or so for one single player? When did United start to follow the Madrid way? The dosh could be better applied elsewhere.

Manchester City will make one marquee signing in summer but that won’t be Bale though. They are looking to buy a striker and would be going for either Napoli’s Edinson Cavani or Atletico Madrid’s Radamel Falcao. They are already grappling with the Financial Fair Play rules, and probably won’t risk their image in the eye of UEFA.

Possibly, but like City, PSG is also under the crude observation of UEFA and won’t risk their reputation by breaching the FFP rules. Most importantly, will any ambitious British player join a league that is not treated in the same level as La Liga, Bundesliga or Serie A?

Pep Guardiola could make Bale his first signing at his new club in summer but thinking realistically will Bayern pay that amount of money for him, when they already have an avalanche of quality midfielders/wingers in the side? The Bavarians could tempt Suarez though, by offering much less than what they would have to pay for the Welshman.

As for other clubs, on a realistic note, it is not worth mentioning. A lot will depend on where Spurs finishes this season in the league. If they qualify for Champions League, probably they won’t sell their key man as they will be better placed financially.

Plus, the new broadcast deal will help them offer Gareth Bale a lucrative wage package which could be too good for him to turn down. Else, Madrid are always there and ready with a blank cheque.