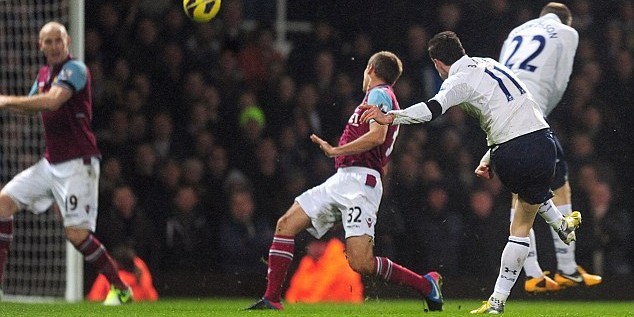 There is no denying that Bale has had a superb campaign, particularly since Christmas, scoring memorable goals at vital times for his side. Strikes away to Norwich City, West Brom and West Ham stand out as the best among his 19 league goals so far.

He is a phenomenal footballer who is only going to get better, but have his performances justified winning both prestigious awards?

The main award was always going to be a three-way fight between Gareth Bale, Luis Suarez and Robin van Persie, and it would’ve been hard to argue with any of the trio winning it.

Luis Suarez’s recent behaviour would arguably have seen the award taken away from him even if he had won it – with the PFA not wanting a bad role model to win it – whether that’s right or not.

The Uruguayan has been more consistent than Bale, but perhaps not quite as explosive at his very best. He has also not quite been able to help Liverpool maintain a fop four push, which Bale has done for Spurs. On the flip side though, Suarez has shone in a weaker side than Bale.

Robin van Persie, meanwhile, had the award wrapped up in January but then proceeded to lose form until April. There is no doubting that the 29-year-old Dutchman has been the difference in the title race, so it could be argued that his influence on the Premier League season has been greater than Bale’s.

He has scored in big games against Manchester City, Liverpool, Chelsea, Arsenal, Everton and Spurs, and his late winner at the Etihad in December was the key moment in the entire title race.

In terms of Young Player of the Year, there were others more deserving than Bale. For starters, though still a very young man, he is soon turning 24 and is now a hugely experienced player. The award shouldn’t be won by someone with so many years of football under their belt.

James Milner won in 2009-10, nearly eight years after his Premier League debut. That was ridiculous, and Bale winning it is not a million miles away from that. It’s not his fault he won it, it’s the PFA’s for having a ridiculous age bracket for the award. It should be 22 and under.

The obvious winner of the award was Christian Benteke. The 22-year-old Aston Villa striker has been magnificent all season, scoring 19 goals in all competitions in a side struggling hugely for Premier League survival. He has carried Villa for large parts of the campaign, and should have won the award.

Romelu Lukaku also deserved to win the award ahead of Bale, after a superb season on loan at West Brom from Chelsea. The 19-year-old has been a key player in an excellent year for Steve Clarke’s side, leading many to describe him as the next Didier Drogba.

The other three nominees were probably less deserving than Bale, in fairness.

Eden Hazard has had a good but slightly overrated first season at Chelsea, while Jack Wilshere has not been at peak fitness or form enough to warrant being nominated. Danny Welbeck was the most scandalous nominee, scoring just twice in 39 games this season, which for a forward at Manchester United is abysmal.

There is no doubt that if he was not a United player he would never have been voted for. He’s a hard working player who can be quite effective, but if he’s the future of England’s attack then things looks very bleak.

There were a number of youngsters more deserving of being up for the award who didn’t get a mention.

Matija Nastasic has been one of the biggest positives at City, while David de Gea and Jordan Henderson have both improved greatly after poor starts to their careers at United and Liverpool, respectively. De Gea’s teammate Rafael has been terrific at right-back, while 17-year-old Southampton left-back Luke Shaw has looked a future England prospect.

There is every chance that Gareth Bale will be playing in another league next season, especially if Spurs fail to qualify for next season’s Champions League, but has he really been so out of this league that he should’ve won both awards in 2012-2013?