Earning the respect of Michael Essien (which may well be a fellow Ghanaian, but is also a player of international level and member of one of the top 10 European teams), that’s no easy feat. Earning the respect of the entire Chelsea youth team after only 1 week of trial, that’s something even more special. But getting the aforementioned Essien to recommend you to the Chelsea board for a quick contract, before the other clubs snatch you… now we’re talking wonderkid material! The fairy tale of Gideon Baah, now at his 2nd week of Trial at the Chelsea FC Youth Academy, seems to have no end.

Last month, Baah was the winner of a football reality show (“Metro MTN Sports Academy”) in Ghana, whose main prize (on top of cash money (~$5000), a Hyundai Accent car, and a all-expense-paid trip to watch the 2010 FIFA World Cup) was the chance of a 2-week trial at Stamford Bridge. The 16-year old youngster managed to beat off competition from 32,000 other applicants to win the reality show in Accra, thus earning his ticket to London. So far Baah’s experience with the Blues has gone so well, that Chelsea’s star midfielder Michael Essien has recommended the board to offer the lad get a real contract.

“Everybody is happy with how Gideon played in the first week with the Chelsea academy” said Essien to Ghanasoccernet.com. “I have monitored his performance from afar and think he is capable of fitting into the academy and progressing to reach the first team. I am not saying this because he is from my country but because he is a talented player as people at the academy are saying. I am confident if he is given a contract he’ll develop into a world-class player for Chelsea and can also develop to help my country“. Essien concluded: “I took him to the to meet some of the first team players and this experience has increased his desire to stay and I am confident if he is given the chance he will excel“.

As for Baah, who by the way is a left-footed offensive midfielder, the youngster still seems to be on cloud nine after the first week. “I can’t believe what is happening to me“, he said. “I am positively surprised with the support I have received from Essien and what he has done to help me since I came here. You wouldn’t expect a player of his calibre to come down to the academy let alone coming to visit me and also to give advice and support. (…) This is what has pushed me to do more here so that I don’t disappoint him because he has put his heart on me to stay here.“On top of Essien, Baah also received the full nod of approval from the Chelsea junior team captain, Nana Twumasi (who was also born in Ghana, but has a few caps as a junior England international). “Gideon is a fantastic talent with amazing skills and he has already won many hearts here at the academy“. 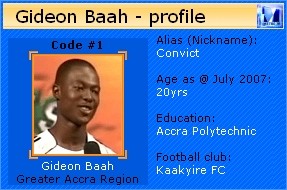 The only dark shadow in Gideon’s fairy tale seems to be the truth regarding his (surprise surprise)… age. Not uncommon amongst African players (Martins anyone?) there seems to be a discrepancy between his profile from a group of Ghanaian soccer sites and that of the Metro MTN website: the former tag the youngster with 16 years, the latter with 20. Until that’s cleared up, the youngster (who has been given the number 52 jersey at Chelsea) keeps scoring goals and impressing his watchers (during last week’s Wednesday training, he outwitted 5 players including the keeper to score into the empty net).

Other tidbits about Baah (from his Metro MTN profile) are that his favorite color is sea blue, his international idol is Kaká, and that he dreams of winning a UEFA Champions league trophy with a European club.

Hey what do you know… Chelsea’s team kit is blue…