Euro 2016: France rely on second half performance once again to reach quarter-finals 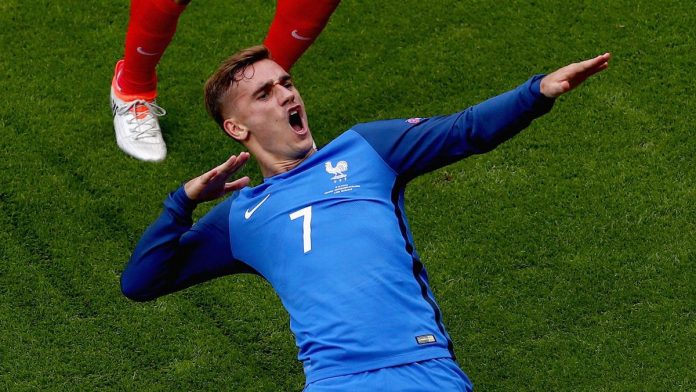 An Antoine Griezmann brace in the second half saw France come from behind to beat the Republic of Ireland in their second round clash in Lyon this afternoon.

The hosts performed poorly in the opening 45 minutes once again before dominating the second half and deservedly progressed into the quarter-final with a 2-1 win.

France have yet to score in the first half of any of their first four games at Euro 2016 now and because of the Republic of Ireland’s opener after only 2 minutes, Didier Deschamps’ side have actually trailed for a longer period of time than they have been ahead in their four matches combined.

They went behind after only two minutes when Paul Pogba bundled over Shane Long inside the penalty area.  It was the Juventus midfielder’s only foul of the game. Robbie Brady smashed home the resulting penalty in off the post to give the underdogs a very early lead.

Brady’s strike is the only first half goal in any game involving France at Euro 2016 and Ireland’s first strike in the opening 45 minutes also.

For the second time in this tournament, Didier Deschamps made a big name half-time substitution by bringing on Kingsley Coman for N’Golo Kanté having previously brought on Paul Pogba for Anthony Martial when 0-0 at half-time versus Albania in their second group game.

Coman instantly made a change by running at the Ireland defence and causing problems.  The quickest player at Euro 2016 created four opportunities during his 45-minute run-out.

Republic of Ireland had three days less rest than France coming into their fourth match of the tournament and had burned a lot of energy in their matches versus Sweden and Italy in particular.  It began to tell early in the second half that they were out of their feet.

France dominated the second half but not before Bacary Sagna’s cross that picked out an unmarked Antoine Griezmann on the penalty spot that the Atlético Madrid headed home the equaliser.

Three minutes later the hosts were ahead.  The same man on the scoresheet – this time Griezmann had a one-on-one with Darren Randolph after both Irish centre-backs challenged Olivier Giroud who simply headed it to his teammate.  Griezmann finished well into the bottom corner.

Midway through the second half Shane Duffy was sent off for a last-man tackle on the edge of the penalty area on the hat-trick chasing Griezmann.  The 25-year-old saw his resulting free kick blocked by Giroud.

France were well on top and but for the remainder of the game but were wasteful in front of goal.  Substitute André-Pierre Gignac did strike the crossbar but also spurned other good opportunities.

Dimitri Payet continued to create chances in this game as the West Ham playmaker has done throughout this tournament but the hosts will be relieved that they finally have other match winner’s in their side.

Second half performances have certainly been the key to France in this tournament -today’s 58th minute equaliser was only seconds later than their earliest goal so far – Olivier Giroud’s 57th minute opener versus Romania in the game that kicked off Euro 2016.

France have only led for a combined 41 minutes at Euro 2016 now – they have trailed for 56 minutes.

The hosts will get another week’s break before their quarter-final match at the Stade de France on Sunday 3 July where they will take on the winners of tomorrow’s match between England and Iceland.