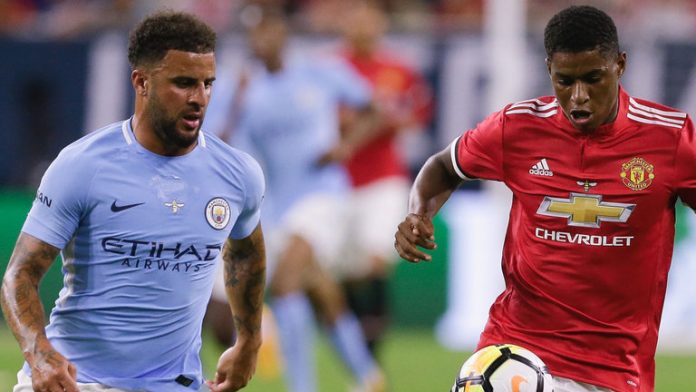 Former Everton and England winger Trevor Steven believes this season’s Premier League title will be fought out by the two Manchester clubs.

City and United are locked together at the top of the table with 13 points from their opening five games, with Chelsea three points behind in third place.

Steven told City AM that he can’t see any other team challenging the Manchester duo this term.

“We will know more in ten games time but, as it stands, Manchester City and Manchester United look to be the only teams capable of sustaining a title challenge,” he said.

“While rivals such as Chelsea, Tottenham, Arsenal and Liverpool have all shown their faults, City and United have stood out as powerhouses who look ready to deliver this year.

“City have gone to another level this term and, in matches such as Saturday’s 6-0 demolition of Watford, have played flowing attacking football that makes you go ‘wow’.

“United, who recorded their third 4-0 win already this campaign against Everton on Sunday, look full of belief. They have not yet reached the heights that City have, but it’s a fine line, and neither team has had a real test yet.

“While City are fluid, United are rugged. And if that makes City more attractive it may also make them more easily disrupted, as we saw last season when they won their first 10 matches in scintillating style only to falter in October.

“On the other hand, the strength of United, embodied by the likes of Marouane Fellaini and Romelu Lukaku, could make them more robust when we get deep into winter and those qualities become more valuable.

“I backed City to win the title before the season started and I wouldn’t go back on that now, but I am no more confident now because United have really impressed me.”

The bookies largely agree with Steven’s views, with City priced at Evens and United 5/2 to win the title. Chelsea are third favourites at 6/1 and Tottenham fourth in the betting at 16/1.

Liverpool and Arsenal’s early season troubles see them priced at around 25/1 and neither side has looked like they’re capable of mounting a serious title challenge this season.