Don’t call me Hugo any more. I’m English, don’t you know? So you have to change my name. At school, P.E. teachers insisted on branding me “Steckel”, although I suppose I should just be grateful I escaped that awful nom de plume that is the quintessentially British “Macca”.

It’s 10:30pm, and a day both frustrating and unproductive has truckled obeisantly past. I’ve seen the interview with “La Radio” yabbering on about “Berba/The Assassin” and “Keano”. “Curbs” is frustrated — who wouldn’t be? “Stevie G” and “El niño” just won’t stop scoring, and “the Pope” feels a little more secure on his Anfield throne. They once had a cocaine-snorting “God” in Liverpool, you know? They say anything’s possible up north.

As you will have made out from my opening paragraph, this post is going to be about NICKNAMES, and I must extend a note of thanks to my father, who was responsible for informing me about Fitz Hall’s ingenious moniker “One size”, and to Hall himself for inspiring this article. A shout out also to former Everton player Neil “Dissa” Pointin and QPR’s on-loan Chelsea midfielder Michael “Haunted” Mancienne. 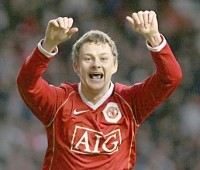 I must admit, foreign influence in the Premier League is welcome in my eyes if only because it makes us rethink our sobriquets. The standard Anglican procedure, that of affixing the ‘a’ or ‘y’ sound onto any name whatsoever, nominally the surname — “yes, I thought Stubbsy was mammoth at the back today” — is problematized somewhat by these delicious foreign syllables. Oh, the torments of David Moyes and Alan Curbishley, who are two of the worst culprits. For every “Sheva” and “Berba” that we manage to conjure up (the Bulgarian is also known as “The Assassin”), there is an “Ole Gunnar Solskjaer”, the “Baby-faced Assassin” whose surnames resist all butchering. Although I dread to think what would’ve happened had he ended up at Arsenal, where some awful Gunnar/Gunner foreplay would surely have emerged. 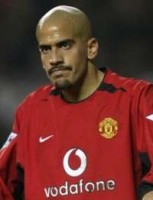 And in truth, we have a lot to learn about nicknaming, us Brits. Where is the imagination? In the World Cup of nicknames, we are destined invariably to be knocked out on penalties. “Wazza” against “The Beast”? “Becks” versus “The Little Witch”? (“Little Witch” i.e. “La Brujita” in Spanish is the name given to Juan Sebastián Verón — whom us Englanders branded simply “Seba”: it is the diminutive form of “La Bruja”, Verón’s father’s nickname back at Estudiantes). For G-d’s sake, as well as playing the best football at the 2006 World Cup, Argentina had by far and away the best set of sobriquets.

Admit it, as a defender you’d cower at the sight of “La pulga atómica”, “El Apache” and either one of “Valdanito” or “El Jardinero” lining up as a united front. It makes me laugh to think of the nomenclatural crisis that would be sparked in Alan Curbishley’s brain when presented with a name like “Messi”. “But it already ends in the “y” sound.” his phrenic cavity would grumble, with furrowed brow, before spitting out the only other sound we seem to know, and “Mezza” he would be forever. Look what’s happened to Rooney. And I much preferred “Roonaldo” to “Wazza”.

And that’s why Mr Hall’s hilarious handle had me in raptures. We can do it, I thought. So I’ve decided to set up a sort of project, if you will. Next time you see a manager refer with desperation to his charge as “Giggsy”, screw up your face, defrost those neurons, and think of something better. Then swing by and let us know what you’ve thought of. And while you’re here, have a vote for your favourite nickname — I’ve provided a long, but no means complete, list below, grouped into countries and continents for ease of browsing and comparison. You could also tell us which country has the best nicknames.

Incidentally, if you’re stuck for inspiration, you could always wham your surname into the Brazilian Nickname Generator and give your alias an aromatic, exotic touch. Now that’s a baptism of fire.

(this list is virtually endless, so I have just provided my favourites/the most famous ones. It is also worth noting that the vast majority of Brazilian players as they are known to us are actually playing under pseudonyms, abbreviations rather than nicknames)

Rest of the world

Hugo Steckelmacher is a regular Soccerlens featured author, whose areas of expertise include the Spanish Liga and the English Premier League. Read more of his work here.