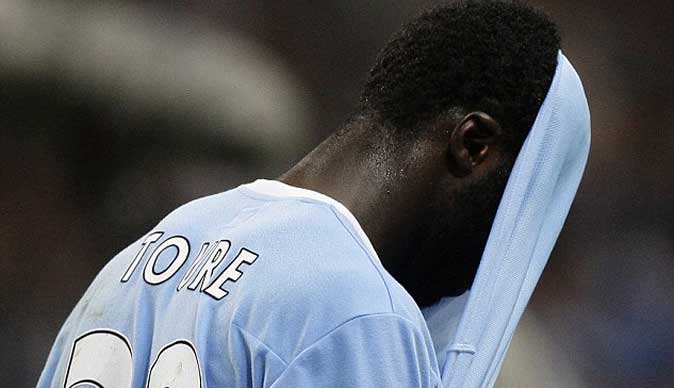 With such cases being a complete lapse of judgment or not by a professional, a number of these incidents have occurred over the years. We’ve taken a look at some of the predominant drug related sagas that have embroiled the sport from Rio’s missed drugs test to El Diego’s ejection from USA 94.

The former England captain has been a model professional for the near entirety of his career. Having won everything there is to win in club football, along with the honour of captaining his country, the Manchester United centre-back can look back fondly on his time when he hangs up his boots.

However, one incident that tarnished his growing stock back in the fall of 2003 involved him missing a drugs test that lead to severe repercussions. The United man claimed he simply forgotten to take the test with The Football Association being unforgiving and handed him an eight month ban along with a £50,000 fine. That led to Ferdinand missing the European Championship in the summer of 2004 and the remainder of the 03/04 campaign with his club (Ed’s note: It’s worth pointing out that Rio offered to retake the test the same day but was refused).

Former Aston Villa and Manchester United goalkeeper Mark Bosnich was banned for nine months in the spring of 2003 when he tested positive for cocaine.

The Australian claimed that his drink had been spiked but the FA commission deemed that he was guilty of improper conduct. His employers at the time Chelsea, immediately terminated his contract with Bosnich being treated for depression shortly afterwards.

Bosnich soon became addicted to the substance that tarnished his career but made a comeback in his homeland in 2008 with the Central Coast Mariners.

Genius is never short of madness and that was certainly the case with El Diego. Arguably the greatest that has ever lived and breathed on a football pitch also has his demons.

Whilst coming to the end of his career in Italy with Napoli, Diego tested positive for cocaine in 1991 which led to a 15 month ban. His career was on the rocks, but not his talent. Diego still sprinkled his magic dust with a brief return at Sevilla before a return to Argentina in his twilight.

In the build-up to the 1994 World Cup, he did his utmost to be fit for the finals, undertaking a personal regime in order to get him prepared for his fourth consecutive finals. However, after a wonderful start to the tournament where he scored a cracker against Greece – accompanied by that infamous wide-eyed celebration – Diego failed another drugs test, this time for the banned substance ephedrine. He was given another lengthy ban but returned to his beloved Boca Juniors after its expiration to conclude his storied career.

Back in 2003 Adrian Mutu was one of the marquee additions to Roman Abramovich’s monopoly at Chelsea as the West Londoners looked to create a dynasty in English football. A promising start for both parties ended in disgrace when the Romanian tested positive for cocaine. His employers immediately terminated his contract, supporting The Football Association’s stance:

Chelsea statement; “We want to make clear that Chelsea has a zero tolerance policy towards drugs.”

Mutu was handed a seven month ban accompanied with a £20,000 fine.

He returned to Serie A in 2005 with Juventus before transferring to Fiorentina the following year. His spell in Florence had been going well up until the turn of 2010 where he failed a doping test. The Italian National Olympic Committee was asked to hand the player a one-year ban by the Italian anti-doping prosecutor but was eventually handed nine months – later dropping to six.

The 32-year old remains with Viola but was suspended by the club earlier this year after breaching his contract. He has recently been reinstated to first team matters.

Soon after leaving Manchester United in 2001, Jaap Stam was beginning to settle into his new life in the Italian capital of Rome with Lazio. The Dutchman had been ushered out of the doors at Old Trafford by Sir Alex Ferguson and before he knew it, failed a drugs test at his new club – testing positive for the anabolic steroid nandrolone.

Stam claimed that he was stunned by the news, having found out whilst in a supermarket with his daughter. He was originally handed a five month ban, eventually reduced to four.

Amazingly Jaap Stam’s teammate at the time Fernando Couto, also tested positive for the use of nandrolone seven months prior to the Dutchman in April 2001.

The former Portugal international continued to protest his innocence during the time but was handed a hefty 10-month ban from the game and ordered to a pay a fine of £31,500. He only served four months of the ban and returned to his national team to play in the 2002 FIFA World Cup.

Nandrolene was a trending topic at the turn of the millennium in Italy with two other high-profile names joining Couto and Stam.

Edgar Davids who was playing his trade with Juventus at the time, tested positive for – yes you guessed it, nandrolene – in the spring of 2001. Like Couto, he too pleaded his innocence:

“I have never used any doping. I condemn it.” he stated.

It was speculated that he could have been suspended for up to two years, having failed a second drug-test but was eventually banned from action for just four months.

Pep Guardiola on the other hand recently cleared his name after a prolonged appeal against a drugs ban he received whilst playing his trade in Italy with Brescia in 2001.

The current Barcelona Coach had always vowed to clear his name and eventually succeeded in 2007. However the case was reopened with the Italian National Olympic Committee believing Guardiola’s argument did not stand up.  Nevertheless the decision wasn’t overturned and the Barcelona man won his case outright in 2009 after eight years of anguish. Incidentally a seven month suspended jail sentence was also revoked when he had been found guilty by a court in Brescia.