Manchester United versus Barcelona is not a mismatch, despite what your friends are saying, and United don’t have to just focusing on stopping the Catalans, despite what that article you read said. Of course Barcelona will walk out at Wembley as favourites, and they should; they’re capable of playing football like no-one else. But as a writer living in Spain, allow me a moment to give some balance to the pre-match analysis, from a country where there is strikingly less assurance that the Catalans will win on Saturday evening.

So: here’s why United are going to do it.

A myth to be immediately busted: that Manchester United were completely dominated, start to finish, in Rome two years ago. Indeed, only last week Pep Guardiola told a Spanish press conference, “We have been looking at the 2009 game and they were better than us in the first half,” Whether Guardiola really believes that is another matter (in fact, Barca’s sense of entitlement could be their greatest enemy in the game), but it’s at the very least an acknowledgement that it was closer than history has rewritten.

United pressed from kick off, played with aggression and incision, and until individual errors gifted Samuel Eto’o a goal after fifteen minutes, Barcelona barely get out of their half. The turning point came at halftime. Alex Ferguson pulled off Anderson, sent on Carlos Tevez instead – presumably thinking that Tevez’s natural energy could compensate for being a midfielder down. It didn’t and United were almost instantly overrun. Sending on Dimitar Berbatov in place of Ji-Sung Park twenty minutes later only made things worse.

It’s highly unlikely Ferguson will make such basic tactical errors again. Even so, statistics show United still had 49% of the ball that night. It’s a point that seems to have got through to the United players recently too: Rio Ferdinand, after recently rewatching the video of that 2-0 defeat, said, “It didn’t scare us. It brought home that we had a lot of chances in that game… It was not as one-sided as I imagined.”

Barca’s two weakest positions are at fullback, particularly on the left. Eric Abidal – who lest we forget is Patrice Evra’s understudy for France – is unfit, and the other options (Maxwell, Adriano) are merely decent. None of them are bad players exactly, but Antonio Valencia, a winger who destroyed Ashley Cole in Old Trafford just a couple of weeks ago, should dominate his direct opponent.

Dani Alves on the other side provides a lot of the Catalan club’s width and threat, but the energy and positional sense of Park can shackle him. Attacking-wise, there is no better player at United at finding space than the Korean and defensively Alves will be in for a long night. United’s play this season has been based on getting the ball out wide as fast as possible, and while Ryan Giggs and Michael Carrick will be harried and pressed by Barcelona, they should still manage to get off simple passes to the wings. Evra and whichever Da Silva twin is chosen will find things more difficult (particularly Evra, who has been close to disastrous all season), but the support from the widemen in front of them should make a huge difference.

It seems almost certain that United will start with Carrick and Giggs in midfield. If that’s the case, the emphasis will be on Rooney to drop into midfield when United don’t have the ball, and in particular to hassle Sergio “mucho morro” Busquets, stop him providing the jump-off point for Barcelona attacks. Rooney’s natural drive makes him ideal, and conversely his constant desire to support the play means it will be interesting to see where Busquets is willing to follow him. Rooney delighted in pulling Chelsea’s formation out of shape in the quarter-finals, and he could easily do it again.

And then there’s the phenomenon that is Chicharito. The difference in speed between the Mexican and all of Barca’s options at centre-back is night and day. And, yes, it’s a cliché, but one worth repeating: Chicharito will only need one chance. Without any doubt, United’s attackers have the ability to hurt Barca’s back four.

United clearly have a stronger group of defenders than Barcelona: Nemanja Vidic is a snarling beast, Ferdinand supremely aware of what’s going on around them, the full-backs mentally tough and daring going forward. Edwin Van Der Sar is still the best keeper in the Premiership. Barca have two slow centre backs who are rarely tested in a league where opponents tend to give up in the tunnel.

Jose Mourinho’s Inter triumphed over Barcelona last season by surrendering possession amd keeping their shape. That night in Camp Nou was relatively simple. Get men behind the ball; if Barca managed to get into the final third, drop Esteban Cambiasso into defence and the other midfielders hold the edge of the box. Barca never figured out an answer.

The strength of United’s defence and the positional intelligence of Carrick and Giggs could make superior possession irrelevant. United having a Pepe in there to throw a spanner in the works would help, as Real Madrid so effectively had in the recent series of Classicos, but without a fit Darren Fletcher you can’t have everything.

Reason 5: The Myths of Modern Football 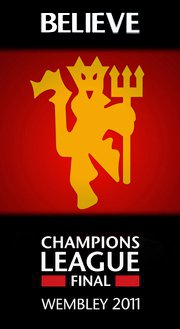 Arsene Wenger has stated (while tipping Manchester United for a victory, it must be said) that Barcelona “will have the ball for 70% of the time.” It’s a remarkable, shocking quote from a man with his philososphy. Why is this a foregone conclusion? Why exactly can’t United keep the ball themselves? Why can’t they work hard and win it back when they don’t have it?

The assumption, which is based on statistics, is ridiculous. All the talk of how United can stop Barcelona is looking in the wrong direction. The answer is incredibly simple. Keep the ball.

Roy Keane wrote in his autobiography that “people talk about tactics and formations, but really, every player needs to look at themselves and say have I done my job properly?” Sometimes it is that simple.

Barca have success because, simply put, they’re better at football than everyone else. But they’re human and have struggled for form in the final third of this season. Like the real teams do, they stepped up and got through it, but so did Manchester United, though they received precious little praise for it. For all the criticism this season, United have also occasionally reached a level that no one else in the Premiership is capable of: think of the first leg against Schalke, the domination of Chelsea in the quarter-finals.

Beating Barcelona won’t be easy, midfield is where games are won and lost, where you earn the right to bring your forwards and wingers into the game, and it’s also where Manchester United are weakest and Barcelona strongest. The Catalans are favourites; but United have more chance of beating them than any other club in Europe do. This is their third final in four years, an astonishing achievement.

It’s ninety minutes of football, a final, and teams very often find it difficult to perform to their usual level in finals, whether they’re Barcelona or not. United can win. And if I still haven’t convinced you, just remember: Barcelona lost to Arsenal earlier this season. If you can lose to Arsenal, you can lose to anyone.