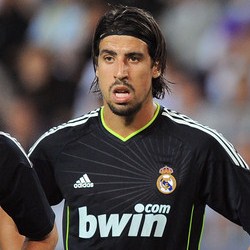 Arsene Wenger’s bid to strengthen the Gunners’ midfield by bringing in Real Madrid’s Sami Khedira may be about to suffer a blow. According to reports from Spanish website AS, Seria A side Fiorentina are making a late attempt to hijack the move and bring the German to the Stadio Artemio Franchi.

After Carlo Ancelotti left him out of the side in the recent UEFA Super Cup, it was revealed that Khedira would leave Madrid this summer, with the Premier League being his most likely destination. The Indepedent reported that Arsenal and Chelsea are the clubs said to be in the ascendancy to sign the 27 year-old, but this late inquiry by Fiorentina has put a spanner in the works. The Italians have reportedly bid 10 million Euros for the newly-crowned World Cup Winner. They are attempting to seal the deal at a cut-down price for a player whose contract runs out at the end of the upcoming season. Madrid are willing to sell Khedira now rather than having to let him go for free next summer.

Ancelotti has signed some big-names in midfield this summer, bringing in Toni Kroos and James Rodriguez to the Spanish capital. This has pushed Khedira  further down the pecking order, after already playing second-fiddle to Luka Modric and Xabi Alonso last season.