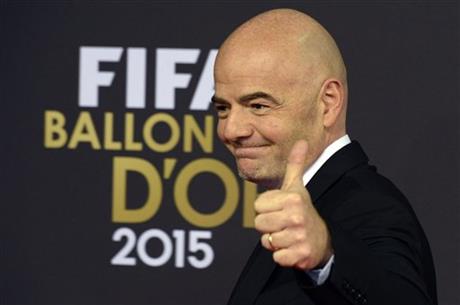 26th February, 2016. This day could mark the beginning of a new revolution in football. FIFA will have a new president on this day. After 18 long years, Sepp Blatter’s controversy-laden-reign will officially come to an end at the FIFA Congress in Zurich.

Five candidates are fighting to become the ninth-elected president in FIFA’s 112-year history. Whoever wins it, will become the most powerful man in world football.

The past 12 months have seen football’s highest governing body, FIFA, being muddled with controversy, with series of arrests and bribery claims have tarnished the brand image of the prestigious organisation.

What left everyone shaking their heads in disgust and anger was the active involvement of former president Sepp Blatter and expected replacement Michel Platini, both are culpable for misusing the powers.

A new leader is thus required who will work with honesty and dedication. We take a look at the profiles of five candidates hoping to be the new Fifa president.

Sheikh Salman initially didn’t want to participate for the presidential election this year. He took part in the race, only when it became clear that Michel Platini won’t be taking part in the election.

Salam was elected the president of the Asian Football Confederation (AFC) in 2013. He and AFC backed Platini to take over the reigns from Blatter, but now with Platini out of the running, Salman has emerged out as favourites.

He is one of the favourites and his chances are very high. He can count on the majority of Asia’s 46 votes and is confident of securing many votes from Africa as well.

Salman sees FIFA “a phoenix project” and he believes he can “lift the organisation from its ashes”. He wants to divide FIFA into two parts: one that will look into the business side of the things and the other solely devotes to footballing issues.

Sexwale describes himself as a “FIFA man” and he is well-connected in Zurich. FIFA has never had a black leader, and he believes it’s time to put an end to it.

“Blacks have been warming the bench for 111 years. The score is 111-0. The time has come to decolonise football. It has been led for too long by white men,” he says.

His chances are very slim and can only hope to gain the support of the African Football Confederation. However, even then, the confederation’s executive announced early this month that they would be endorsing Sheikh Salman for the FIFA’s top post.

His eye catching proposal is to allow national teams to have commercial sponsors. He believes that majority of FIFA’s 209 member are struggling financially and that funds should be properly distributed. He wants more wealth to be allocated to the poorest member associations.  He has always been a good friend of Blatter and keeps in touch with the former president, and his involvement in the 2010 World Cup is still under investigation, which reduces his chances of winning the election.

He was Blatter’s only challenger in last May’s election and is one of the favourites to become the new FIFA president.  He has always been an anti-Blatter and called Platini as “the son of Blatter”. However, it is difficult to see how he can win the election this time. His major hope rest with UEFA, but those votes will be going to Gianni Infantino this time.

Prince Ali does not have the backing of AFC either, as maximum votes will go to Sheikh Salman.

Ali says that he wants to restore credibility by introducing modern governance standards. He has pledged to eradicate corruption by fully co-operating with the Swiss and US authorities investigating FIFA’s criminal activities.

Infantino became Uefa’s main man after Platini was banned from football for six years. He visited more than 70 countries in two months and did an excellent campaign. He hopes to win votes from all of FIFA’s six confederations.

Being the UEFA general secretary, he can count on all of Europe’s 53 votes, plus he has the backing of South American CONMEBOL confederation. Most importantly, he is backed by influential personalities in the game like Jose Mourinho, Luis Figo and Fabio Capello.

He has the required experience to run the football’s highest governing body, as he has worked at UEFA for 16 years. He also has the experience of running major competitions like the Champions League and Euro 2012.

Infantino wants to expand the World Cup from 32 to 40 teams. He vows to bring transparency at FIFA and says that he would disclose his own salary and those of his executives.

His idea of returning 50 per cent of its revenue back to its 209 members instead of current 18 percent, seems a good idea, and should work in his favour.

Champagne tried to stand in last May’s election, but he didn’t receive the five letters of support from member associations.

This time it is a different story. He has worked at FIFA for 11 years until he was fired by Blatter. He has a very slim chance of winning but he vowed to modernise FIFA, should he become the president.

Champagne doesn’t believe that expanding the World Cup from 32 to 40 teams would help anyone. He wants FIFA to be more transparent and is keen to introduce video technology to help referees.