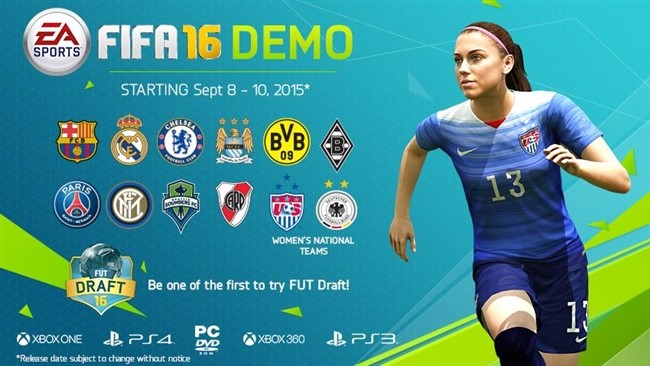 The FIFA 16 demo will be released on Xbox One, Play Station 4, PC, Xbox 360, and Play Station 3 consoles between September 8 and September 10 with a plethora of teams, stadiums, and gameplay options available to enjoy before the full game drops some two weeks later.

This stands to be one of FIFA’s most expansive demo experiences yet. Modes include a standard kickoff option, along with new skill games, the new FIFA Trainer, and a FIFA Ultimate Team Draft.

When launching the demo for the first time on the next-gen consoles, you will be thrown into El Clasico between Barcelona and Real Madrid at the Santiago Bernabeu. Manchester City against Liverpool at Anfield, featuring the authentic Premier League broadcast presentation, was the intro match last year.

Speaking of presentation, the authentic Bundesliga presentation is in the demo and will be active if you play Boruissa Dortmund against Borussia Monchengladbach at Borussia-Park.

The demo also provides the opportunity to try women’s teams for the first time in a FIFA game, as the world champion US team features alongside Germany. As with the full game, women’s teams can only play against each other in the demo.

Along with the aforementioned sides, including Barcelona and Real Madrid, other playable teams include Seattle Sounders, Chelsea, Inter Milan, Paris St. Germain, River Plate, and Manchester City. The Sounders’ CenturyLink Field is the third stadium in the demo alongside Borussia-Park and the Bernabeu.

All in all, that’s twelve teams, three grounds, two authentic broadcast packages, and four game modes to enjoy. There is not yet news on variables like how long the demo games will be, nor the available time and weather conditions.

FIFA 16 is set to be released on September 22 in North America, and September 24 in Europe.