On a weekend that saw Manchester United answer their critics in fine style with a 4-1 win away to Swansea, and Jose Mourinho’s Chelsea open their campaign with a 2-0 victory over Hull City, two defensive veterans of England stood out among their peers. 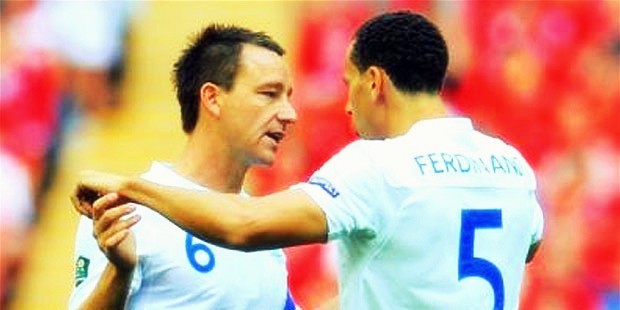 Rio Ferdinand and John Terry, 34 and 32 years old respectively, forged one of most reliable and respected English centre-back pairings during the mid to the end of 00s. Both have won every major trophy available in club football, captained their country and earned praise from great players across the globe.

With both now retired from international duty – Ferdinand voluntarily and Terry more controversially – it is easy write them off as ‘past it’. If their opening day displays are anything to go by then it could certainly be argued that they are still the two best defenders England have to offer.

The United man is one of those defenders you often don’t notice during games. Because his game does not involve thunderous tackles, bravery and brute strength like his partner Nemanja Vidic, it’s easy to think he’s not doing as much defensive work as the Serb. The truth of the matter is that his positional sense and intelligence as a defender mean he is rarely asked to lunge in or make a desperate clearing header away from danger.

When he plays there is an assured nature to United’s defending, and his influence in David Moyes’ side is still great. Against Swansea he was virtually faultless.

Terry, meanwhile, is very much in the Vidic mould. He may be one of the most loathed England footballers in history, but that doesn’t mean he hasn’t been a fantastic player during his illustrious career. Although injuries have crept up on him and his pace is not what it was, he still carries an aura about him.

Chelsea look a different team when he is on pitch, with his combination of great leadership and blood and guts style make the West London side a tough one to break down. He clearly didn’t get on with Rafa Benitez and his fitness has been a problem over the last year or two, but he looked back to his best against Steve Bruce’s side. Admittedly tougher games will come his way this season, but he looks raring to go.

So who could it be argued argue is better than Ferdinand and Terry in terms of English defenders at present?

The likes of Phil Jagielka, Joleon Lescott and Michael Dawson are all very reliable players for their respective clubs and will do a job for England, but there is not the same trust in them when it comes to facing one of Europe’s deadliest strikers. All three are in their 30s now too, so they don’t even have youth on their side ahead of Ferdinand and Terry.

Gary Cahill, Terry’s partner at the back during the win over Hull, is another talented defender but again he lacks a certain authority. There is no doubt that he will learn greatly from playing alongside the Chelsea skipper, but he lacks his consistency.

Phil Jones and Chris Smalling certainly represent the future for England, with both United men are superb prospects. Smalling is very much like Ferdinand in style, while Jones is more like Terry. Both will eventually become regulars at Old Trafford and for the Three Lions, but if they were so good now they would surely already have replaced Ferdinand in the United side, wouldn’t they?

Obviously this is all hypothetical because neither player will ever return to the international fold, but it is certainly a damning statement that Roy Hodgson would still almost certainly call upon them to save England’s shaky rearguard if they became available again.

You only have to look at the way they defended against an incredibly average Scotland side to see that Hodgson has issues at the back. If England do manage to qualify for next summer’s World Cup in Brazil, this is going to be a huge issue if it isn’t resolved between now and then.

They may not be universally popular players for various reasons, and they may also dislike one another after the incident between Terry and Ferdinand’s brother Anton, but there can be no doubting that Rio Ferdinand and John Terry have been, and still are, magnificent servants to English football.

Age is just a figure and should often be ignored, and the two veterans are still better than their counterparts after well over a decade at the top of English football.