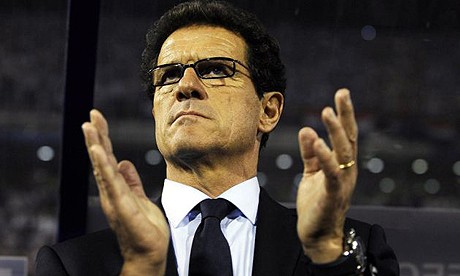 The Soccerlens Fantasy Football Game isn’t just a fun way to compete against other football fans and win some prize money. It’s also the next England manager. Or it could be.

I’ve been poking around the fantasy football stats and have selected an England team to face Montenegro based on highest average weekly score in the Soccerlens Fantasy Football Game. I’ve only selected players that are currently available to play for England, so no Micah Richards (injured) and no Paul Scholes (only interested in playing for Manchester United).

Defence is a little trickier. Chelsea’s Ashley Cole is the obvious choice at left back, and his average of 5.5 points per game also makes him captain of this England team. The next best English defender is Birmingham City’s Scott Dann, followed by a tie between Liam Ridgewell (also of Birmingham) and Newcastle’s Mike Williamson. I’m not breaking up that Blues central defensive partnership, so Williamson becomes the world’s first 6’4″ internationl right back.

In midfield we have a very unlikely right winger in Blackpool’s Matt Phillips, who averages five points per game, OK, so he’s only ever played one game in the Premier League, but Arsenal’s Theo Walcott went to the World Cup in 2006 having played less than that. Central midfield is Wigan’s Manchester United loanee Tom Cleverley and Aston Villa’s Stewart Downing, with Downing’s Villa teammate Ashley Young cutting in from the left wing on his right foot.

Up front it’s nice and straightforward, with Wayne Rooney’s fantasy football scored holding up surprisingly well (averaging 4.8 points per game over four games) despite his recent alleged nighttime activities. Rooney is joined by Newcastle big man Andy Carroll, who will hopefully keep him out of trouble.

Here’s the starting XI for England vs. Montenegro according to fantasy football: 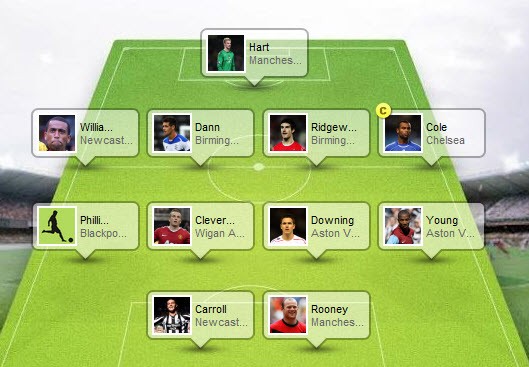 What do you think? Is this team better than the real thing? Should we replace Fabio Capello with fantasy football? It would certainly be cheaper…

You can play the Soccerlens Fantasy Football Game yourself when the Premier League returns to action this weekend. The game is weekly, not season long, so you can join in at any point and drop out at any point. Sort of like how Dimitar Berbatov plays football. There are three levels of play: Silver, Gold, Platinum. Silver is $4.99 to enter, with $40 prize money to be won. Gold is $9.99 with $80 prize money. Platinum is $24.99 with $200 prize money.