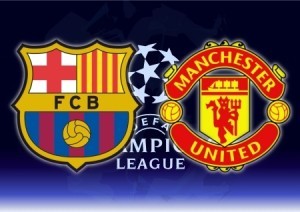 Manchester United and Barcelona meet at Wembley on Saturday to battle it out for the mantle of the best side in European club football. Dominant in their domestic leagues, sides laden with international superstars and a track record of success in the competition, the pair have been at the pinnacle for the last decade. A scintillating tie awaits; here are the key statistics that may give an insight into the eventual winners.

Sir Alex Ferguson’s side have only beaten the Catalans once in the tournament’s history, a 1-0 victory at Old Trafford in the semi final second leg in the English club’s triumphant 2007/08 campaign. The Spanish side can boast two wins over the Manchester club, with a 4-0 demolition at the Camp Nou in the group stages of the 1994/95 season being complimented by their 2-0 victory in the final in Rome two years ago. The results in full:

Both sides have identical records in their respective group stages; four wins and two draws from six games. United are unbeaten in their journey to the final, with Barca only suffering defeat at the hands of Arsenal, 2-1 at the Emirates in the last 16. The Spaniards have significantly outscored Saturday’s opponents, by nine goals, but United have a stingier defence, only letting in four goals all season.

The Blaugrana have the tournament top goalscorer in the form of Lionel Messi in their ranks, who has bagged 11 goals in 12 games, three more than closest rivals Samuel Eto’o, Mario Gomez and Cleo, who managed 8 strikes each before their sides were eliminated. United’s top goalscorer is Mexican Javier ‘Chicarito’ Hernandez, who has found the back of the net four times in eight games.

Both Ryan Giggs and Andres Iniesta have four assists in this season’s tournament, two behind this campaign’s top provider Mesut Ozil, who has set up six Real Madrid goals.

In the competition history, the Argentinian is Barcelona’s all time top scorer, whilst United’s Giggs is equal with Denis Law in second place as the English side’s all time top European goalgetter

Giggs also tops the list of European appearances amongst the current crop of players, with 139 outings for the Reds in Europe, ten more than Paul Scholes and four behind competition all-time leader Raul. Barcelona’s most experienced player in Europe is Xavi, with 129 games.

Going all the way back to the 1994/95 season meetings between the sides, Giggs and Barca coach Pep Guardiola both featured in both games.

Both clubs have won the tournament on three occasions, but stand considerably behind all time top tournament victors Real Madrid, who have prevailed on nine occasions. The Catalans have been beaten in the final more times, with United’s sole final defeat against Barcelona two seasons ago.

This year’s winners will receive €9 million, with €5.6 million for the runners-up. UEFA pay the clubs by progression through each stage, €800,000 for a win and €400,000 for a draw. The total financial reward will be made up of performance-related payments, money from the television market pool and matchday revenue.

Barcelona will make €55.5m if they triumph at Wembley; €29.7m for their results and participation in the tournament and €25.8 from TV rights.

United are in line to receive €56.3m if they beat Barcelona in the final; €30.5m from UEFA for the games they have played and their performances and €25.8 from TV rights.

In the 2011 Forbes Richlist, Manchester United top the list of wealthiest clubs in world football, whilst Barcelona are back in fifth, behind Real Madrid, Arsenal and Bayern Munich. The Catalans have a higher revenue than the English side however – as it is an American study all figures are in US dollars

In terms of redistributing this wealth back to the players, Barcelona pay their stars considerably more than United, with the La Liga champions the highest paying employers in world football; the Premier League champions are back in 8th in the global game.

So there you have it, both sides are global leaders both on and off the pitch which should make for a mouth watering finale. A potent Spanish attack against a regimented English defence, a midfield battle between some the tournaments most experienced players and both sides looking for a double; roll on Saturday.