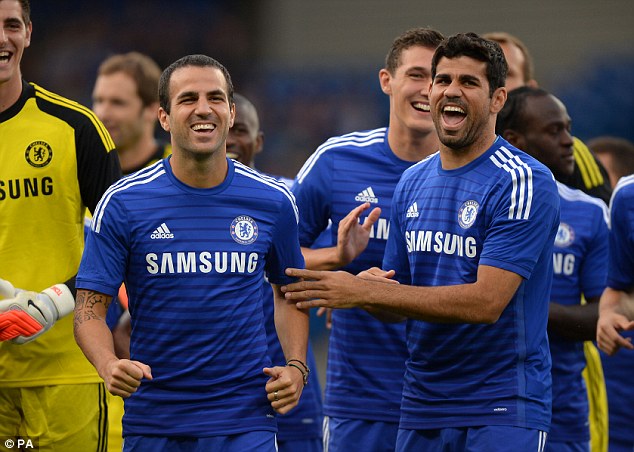 Chelsea star Cesc Fabregas believes he would have been subjected to abuse from Arsenal fans even if he had joined Manchester United or Manchester City during the summer transfer window.

The 27-year-old was with the north London club for eight years before joining his boyhood club Barcelona in 2011. However, the Spain international’s services were no longer at Nou Camp and was asked to leave the La Liga giants.

Fabregas joined the Blues after Arsene Wenger refused to initiate the buyback clause. The former Gunners skipper believes “changing clubs” is a part of the game and their abuse will not change his feelings towards Arsenal.

“Changing clubs is part of the game and people must remember it was Arsenal who didn’t take up the buy-back option for me, What am I going to do – retire? No way,” ,” Fabregas said in The Sun.

“I wanted to keep playing football, enjoying myself and my career and I felt that joining Chelsea was the best option for me. There would have been a reaction wherever I had gone.”

“If I had moved to Manchester United they would say, ‘He’s gone to a club that have been our big rivals for such a long time.’ If it had been Manchester City they would have complained, too.”

“I would never intentionally do anything to create any problem with Arsenal or any other club. They can say to me whatever they want now, they can dislike me, they can hate me – but nothing will change my feelings for the club.”

“I used to watch all the games even after I left. I still have friends there, I always supported them and I have a really good connection with Arsenal.”

“But in football things change. I left Arsenal for a reason and I didn’t come back for a reason. I left because it was always my dream to play for my hometown team Barcelona. I hoped people would understand that.”

“When I left Arsenal I went with the mentality that I would always stay at Barcelona and I would never leave, but things changed for me there and this summer I called them and told them I wanted to leave.”

“After my mind was made up it was then all about finding the best option for me and I decided to come back to England. I was always going back to the Premier League because, to me, there’s no other league around the world that’s better than it.”

“Arsenal had the first option – it was written in the contract – and so they could have said ‘yes’ but they decided not to. They told me now Ozil was there, there was no need for me.”

“That’s life. No problem. We move on. Life moves on. Football moves on. Any team I would have gone to, apart from Arsenal, it would have been bad to them,” the former Arsenal midfielder concluded.

Since joining Jose Mourinho’s side, Fabregas has been in fine form so far. In the Premier League, he already has six assists to his name from five league appearances this season.

He has been the key figure in Chelsea’ s midfield and his partnership with his compatriot Diego Costa has seen the Blues enjoy a five match unbeaten run in the top flight English competition.

Arsenal have lacked creativity in the midfield and Fabregas is one player who can play in mutiple positions. The Gunners’ decision to reject the chance to re-sign could eventually prove costly at the end of the season.

When a player of Fabregas’ calibre is made available, one just needs to make space. Arsenal fans should not abuse or show their anger towards joining Chelsea as the Spaniard wanted to join the Emirates club and then rejection saw him join the Blues.