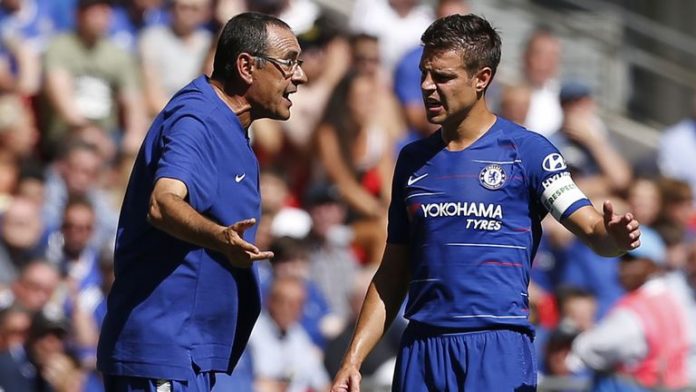 Chelsea and Arsenal turn their attentions to the Europa League on Thursday aiming to boost their hopes of progressing to the quarter-finals.

The Blues host Dynamo Kiev in the first leg of their last-16 tie, while Arsenal head to France to take on Rennes.

Manager Maurizio Sarri may decide to rotate his squad after mentioning fatigue had been a factor during his side’s narrow 2-1 league victory at Fulham over the weekend.

The likes of Callum Hudson-Odoi and Olivier Giroud both scored in the second leg against Malmo and will hope to play a prominent role.

Willy Caballero could return in goal, but midfielders Danny Drinkwater and Marco van Ginkel remain on the sidelines.

The two sides have met twice before, during the group stages of the 2015/16 Champions League. Following a goalless draw in Kiev the Blues won 2-1 on home soil, with Willian’s excellent late free-kick securing the victory,

Arsenal will be on their guard in France after losing the first leg in the previous round at BATE Borisov, but they will be confident of progressing to the last eight.

Alexandre Lacazette remains suspended in Europe, so Pierre-Emerick Aubameyang should start. Hector Bellerin, Danny Welbeck and Rob Holding are all out injured.

Mesut Ozil may get the nod in the number 10 role, with Aaron Ramsey expected to be rested for this weekend’s Premier League clash with Manchester United.

Rennes currently sit 10th in Ligue 1, but their victory over Real Betis in the last round shows that it would be foolish to underestimate them.

There are some tasty ties elsewhere in the last 16, with clash between Eintracht Frankfurt and Inter Milan perhaps the most eye-catching.

Frankfurt, the only German team remaining in the Europa League, has won seven of its eight games in the competition and scored more goals (23) than any other club.

Inter is one of two Italian sides remaining in the tournament along with Napoli, who will face Red Bull Salzburg.

Spain is still well represented in the Europa League, with Valencia, Sevilla and Villarreal all in action on Thursday.

Valencia and Sevilla should progress past Krasnador and Slavia Prague respectively, but Villarreal may have their work cut out against Zenit St Petersburg.

Dinamo Zagreb versus Benfica completes the last 16 line-up and the Portuguese side are fancied to reach the quarter-finals.

Europa League Round of 16 Betting Tips

Eintracht Frankfurt’s front three of Luka Jovic, Sebastian Haller and Ante Rebic have scored 48 goals between them this season. Bet on over 3.5 goals in the Inter game with BetUK at 5/2.

Rennes are good going forward, but shaky at the back. Back Arsenal to win and both teams to score at 27/10.

Napoli will be eager to build up a first leg lead at home to Salzburg. Bet on them to win and over 2.5 goals in the match at 11/10 with BetUK.