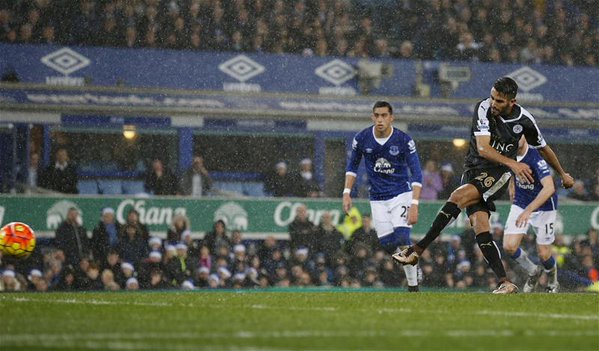 Leicester City maintained their lead at the top of the Barclays Premier League table and the dream run continues after registering a 3-2 win over Everton at the Gooidson Park. Can we take now them consider as a serious contender for the Premier League title?

Arsenal move to second in the table after earning a 2-1 victory at the Emirates over title challengers Manchester City.

Chelsea returned to winning ways after registering a comfortable 3-1 victory over Sunderland at Stamford Bridge.

Tottenham move into top four for the first time this season after beating Southampton 2-0 at the Stadium of Lights.

Manchester United’s poor form continues, after the Red Devils failing to win their sixth consecutive games in all competitions. This time they lost 2-1 at home to Norwich City, but more than the result it was their dire performance that has been a huge concern for the fans.

Elsewhere, Crystal Palace level points with Spurs after winning 2-1 against Stoke City while Eddie Howe’s Bournemouth secured their third win in a row, beating West Brom 2-1 at the Hawthorns. 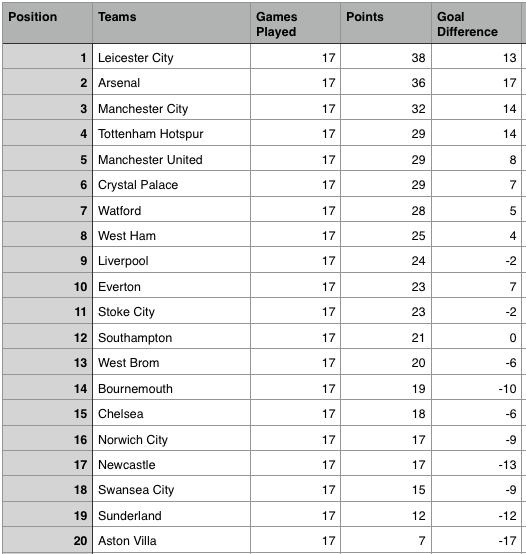 And the Oscar goes to…Oscar The Brazilian produced arguably his best performance of the season, as Chelsea began their life post-Jose Mourinho with an emphatic 3-1 win over a miserable Sunderland side at the Bridge. Oscar had cut a frustrating figure under Jose Mourinho this season. With the Portuguese gone, it felt like he is rejuvenated of all a sudden – the old Oscar that we used to know – silky skills, clever passing, runs into the box, taking shots – call came out from his vast repertoire. He was everywhere. He took 105 touches, more than any other player on the pitch last night, made four tackles, took five shots, provided couple of key passes and capped the wonderful night with a goal to his name.

“We were not good enough to win; that is a fact, we have lost,” said Van Gaal. “The fans are expecting that we win and we expect the same. We have never lost this season at home and we are in a bad period and you can see what (a lack of) confidence is doing to my players. We have to stick together now and come out of this bad period, but you have seen this is not so easy.

“Of course I am worried about [Mourinho’s sacking] because belief in a manager is very important. And when you lose as a manager that confidence decreases.”

So, he admits that he is feeling the pressure. United are winless in six matches, but dropping out of top four has caused a genuine panic amongst the United fans. Defensively vulnerable and blunt in attack, the fans are frustrated with the dull football being displayed week in week out under LvG. Even his staunch supporters have now turned. It seems like the Dutchman is running out of ideas about how to arrest this slump.

Leicester City – The juggernaut rolls on

Jamie Vardy and Riyad Mahrez are enjoying the form of their life. When one is not scoring, he is filling up with providing for the other. Vardy wasn’t on target at Goodison, but he turned into provider this time for Mahrez, who scored twice against Everton to take his goal tally to 15 this season.

The two newcomers have not only impressed everyone by pulling up shock results against the big teams, but the manner of their approach adds a new dimension to the league. Eddie Howe’s Bournemouth are slowly picking up the pace and have moved into 14th courtesy of three consecutive victories that stretch to five games without being defeated.

Watford are just one point behind Manchester United after beating Liverpool 3-0 at the Vicarage Road on Sunday. The real test begins now. Watford’s next three games are very crucial – they face Chelsea, Tottenham and Manchester City during the busy festive period.

Giroud on fire…Arsenal on song

Olivier Giroud paid tribute to Arsene Wenger for putting an enormous faith in him, when press and pundits were tearing him apart for his early poor him. The French striker is now repaying back the faith as he scored nine goals in his last seven games for the club.

The general feeling among the pundits is that Giroud is a good striker but he is not good enough to be the leading man and guide his team to Premier League title. Well, Arsenal are two points behind Leicester, and history shows teams that are 1st or 2nd in Christmas usually go on to win the league. Fingers crossed.