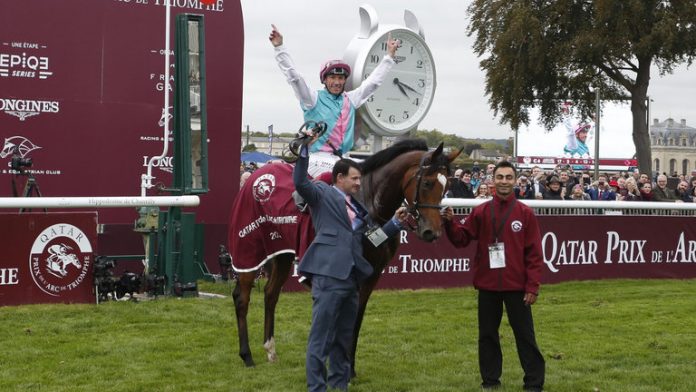 With the Prix de l’Arc de Triomphe now done and dusted, attention will quickly switch to what promises to be an exciting few weeks in horse racing.

Enable was unable to make it three-in-a-row in France, but that shouldn’t take the gloss off what has been a remarkable career for John Gosden’s stable star.

Read on as we look at what’s coming up in the world of horse racing.

If you like betting on horse racing, you’d have made plenty of money by backing Pinatubo throughout the current campaign.

The Shamardal colt has swept all before him this term, winning five races in a row including a nine-length demolition job in the National Stakes in Ireland.

Charlie’s Appleby’s two-year-old is a short price to win the Dewhurst Stakes at Newmarket on Saturday and it’s difficult to imagine him coming up short.

Aidan O’Brien has saddled six previous winners of the race and his best hope looks to be Wichita who won the Tattersalls Stakes over the same course and distance last month.

One last ride for Enable?

Connections were non-committal about Enable’s future following her defeat in France, but there are reasons to suspect that they will want to go out on a high note.

The QIPCO Champion Stakes at Ascot on October 19 is one option, although it might be felt that the race would come too soon after the Arc.

Conditions at Santa Anita would suit Enable down to the ground and the opportunity to finish with a flourish could be too good to turn down.

While Enable’s future remains up in the air, Gosden’s Stradivarius is on course to defend his QIPCO British Champions Long Distance Cup title at Ascot this month.

The five-year-old has enjoyed a superb season, securing a second Weatherbys Hamilton Stayers’ Million bonus after mopping up all the top long-distance contests.

Heavy ground would probably keep Stradivarius out of the race, but if gets his going he will prove a tough nut to crack.

Stradivarius romped to victory in the Doncaster Cup in his most recent outing and it would be fantastic to see him extend his winning run to 11 races at Ascot.

Jockey John Velazquez became the all-time leader in graded stakes wins when he rode Bast to victory at Santa Anita during September.

That took him past the 660-win tally set by Jerry Bailey and he will undoubtedly be eager to add to his total at the Breeders’ Cup in November.

Despite his record of success, ‘Johnny V’ has never won the Classic but he has a glorious opportunity to break his duck this time around.

Code of Honor is one the favourites for the race after winning three in a row and he looks a good bet to make it four at Santa Anita.