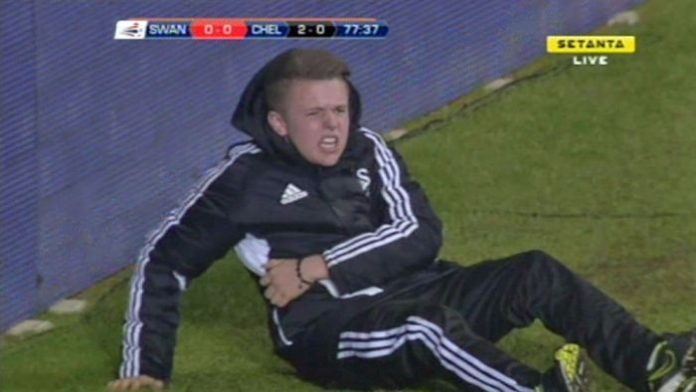 Chelsea midfielder Eden Hazard has issued an apology for the ballboy-kicking incident as his team crashes out of the League Cup semi-final.

It was an impressive display from Swansea and they deservedly went through to their first Capital One Cup final with their 2-0 lead over two legs. The fact that this win came against the reigning European Champions makes it an even larger accomplishment.

Now only the League Two side Bradford City stands in their way of attaining glory. But sadly for Swansea, the match and perhaps this accomplishment was over shadowed by an incident that transpired on the pitch during the 2nd leg.

In the 78th minute of the match, Azpilicueta’s pass for Eden Hazard was overplayed and the ball went out for a goal kick. A ballboy went up to pick the ball (too slowly one must add) and with time running out for Chelsea, Eden Hazard took it upon himself to retrieve the ball.

Both the teams came together over the incident, but as things calmed down referee Chirs Foy called over Eden Hazard and showed him a red card. While one can’t say it changed the outcome of the match as even with eleven men Chelsea didn’t look threatening enough to score to the two goals that they required in this match, it did overshadow Swansea’s brilliant achievement.

The ballboys were wasting time, there are no two ways about it. As the ball went out for goal kicks behind the Swansea goal, the ballboys took their own time to return it. It seemed as if they were instructed to do so. But this is certainly not the first time these things have come under the spot light.

Most of the home teams take this advantage, but obviously that doesn’t make this a right thing to do. The authorities would certainly need to keep a stern eye on this in future.

But similarly, even Eden Hazard’s actions were uncalled for. One can understand the Belgium international’s frustration as time was running out for his side and the ballboys were doing their best to waste some more. But that reaction is not something one expects from a professional footballer. Yohan Cabaye was involved in a similar incident last season.

The ballboy went into the Chelsea dressing-room after the game and apparently there were apologies from both the sides. Eden Hazard, in an interview to Chelsea TV, has explained his reaction during that moment and has issued an apology once again.

“The ballboy came in the changing room and we had a quick chat and I apologised and the boy apologised as well, and it is over. Sorry.”

Chelsea manager Rafa Benitez believes both the ballboy and Hazard were wrong in what they did – the ballboy for wasting time and Hazard for venting his frustrations. Benitez explained to press:

“The ballboy knows he was wasting time. We are disappointed to lose the player but we cannot change things. They both recognise there was a mistake.

“The boy was apologising for time wasting. Hazard was frustrated and tried to get the ball. He was kicking the ball and getting the ball.

“We can analyse it for half an hour but we know that both are wrong.”

Swansea City has revealed that no charges will be pressed against Hazard from the boy’s family and has commended the Chelsea players for their “exemplary behaviour” when the ballboy went into their changing room.

“The police have interviewed the boy and his father and there are no charges going to be pressed, as far as they are concerned that is the matter closed.

“The ballboy has been into the Chelsea dressing room after the game and shaken hands with Eden Hazard. The likes of John Terry and Frank Lampard were exemplary in their behaviour in welcoming him into the dressing room.

“Chelsea asked if he could come in and our kit lady took him in and they shook hands, he is fine.

“As far as we are concerned the matter is closed. He has been a ballboy here for six years with no incidents here at the stadium.”