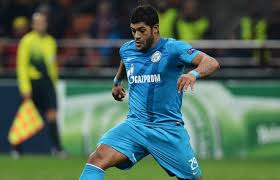 Earlier in the week, an imposter NBC journalist Micheal Stafford had claimed that Arsenal had submitted a £20m to Zenit to acquire the services of the dazzling 27 year old forward. There were also reports that Arsenal would also table an improved £26m bid to complete the player’s medical before the World Cup begins next week.

However the credibility of these sources are yet to be verified and now that Zenit have clearly denied a move for the star player effectively means the rumours have no standing ground. Jonathan Tannenwald, who is a reliable source from the United States too squashed the claims made by Stafford.

Hulk moved to Zenit in a whopping €55m move from Portuguese giants Porto in the summer of 2012 and has enjoyed a stunning 2013-14 season scoring 21 goals and grabbing 8 assists in 32 appearances for the Russian outfit.

There is no doubt that Arsenal manager Arsene Wenger is desperate to sign a striker in the summer but it is highly unlikely that Hulk will join the Gunners in the near future.