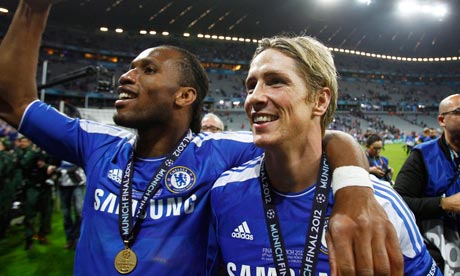 Despite leading Chelsea to Champions League glory on Saturday it appears Didier Drogba has played his last game for the club.

France Football magazine has reported that the Ivory Coast star has confirmed he is leaving Stamford Bridge.

The striker has been quoted saying he informed his team-mates of his decision during the club’s open-top bus parade on Monday after leading them to the greatest moment in their history on Saturday night.

“We will no longer be together next season,” the 34-year-old said in quotes attributed to the magazine.

Drogba, who has reportedly already agreed a deal to join Shanghai Shenhua when his Chelsea contract expires this summer, is said to have admitted he struggled to get the words out and burst into tears.

He went on to say: “As I decided to leave, I wanted to tell them straight in the eye. Except that I could not do it. They made me crack.”

“Even though it’s been three years since I said I wanted to leave, I find it hard to admit that it’s over with this club – especially as I did not feel like this.”

“But I could not see myself sitting on the bench to watch others play when the club plans to set up a new team.”

“So that’s it – I am preparing for my leap into the unknown. It’s going to be another adventure.” The 34-year-old has been linked with a lucrative move to Chinese club Shanghai Shenhuan, where his former Chelsea team-mate Nicolas Anelka is player coach.

If he does leave it would mean his very last kick for Chelsea would be the penalty that gave his side victory against Bayern.

For their part, Chelsea have refused to offer the two-year contract Drogba was looking for The Spanish International will hold talks with the club about his future after criticising the way he has been treated.

Torres admitted it was one of the biggest disappointments of his career to start on the bench in the Champions League final win over Bayern Munich.

Torres told Spanish journalist Guillem Balague:  “I have been through the worst moments of my career during the season.

“I felt they have treated me in a way I was not expecting.”

The striker, signed from Liverpool for £50m in January 2011, has hit six league goals this season as part of a total of 11 in all competitions.

“It was a huge disappointment when I saw the line-up, perhaps the biggest disappointment in my life. I thought I would play in this game and I couldn’t imagine not doing so.”

Discussing his future, he added: “We’ve had a lot of talks and we’ll talk about my future at the end of the season because the role I’ve had this season is not for me, nor is it the one I expected to play when I came here. There’s now huge uncertainty regarding the future of Chelsea’s two frontmen. If they were to leave, Daniel Sturridge would become the only established striker left at the club. Surely this means Abramovich intends to invest in a couple of attacking players this summer. Following Chelsea’s European success, the funds will definitely be available to do this.

Despite this, the next big question is: Where next for Drogba? Will he move to Asia for his own economic benefit? Or stay in Europe to challenge Chelsea in next year’s Champions League? There’s no doubt wherever he ends up, he will be playing first team football as a key member of the squad.