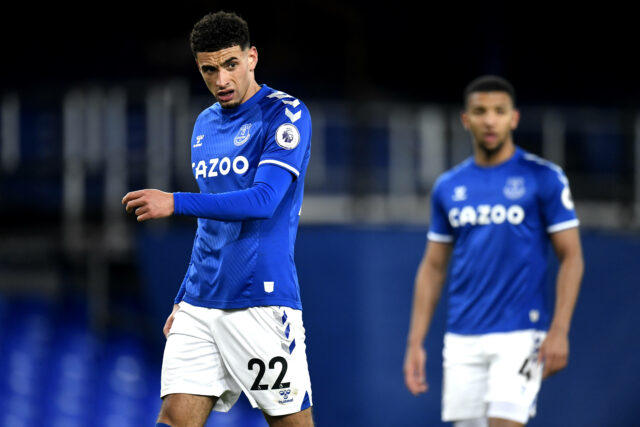 Everton’s Ben Godfrey and Tom Davies have failed late fitness tests ahead of the U21 European Championship group stage match between England and Croatia.

Both Godfrey and Davies have impressed with the Toffees this season.

Godfrey signed for Everton from Norwich City last summer in a big-money move and has lived up to expectations with several impressive performances.

Davies has also shown signs of improvement during the campaign, despite not playing a full 90 minutes since the Merseyside derby.

Both players were expected to be included in the matchday squad on Monday evening when Everton face Crystal Palace, but their involvement has now been thrown into doubt.

As reported by the Liverpool Echo, both Godfrey and Davies failed late fitness tests ahead of the England U21 match with Croatia on Wednesday.

There is no indication whether this could stop them from featuring on Monday, but this will be concerning Everton fans.

The Toffees already have several players on the sidelines, with Abdoulaye Doucoure, Fabian Delph and Jean-Philippe Gbamin all out of action.

SL View – How could this affect Everton’s chances against Crystal Palace?

This could be quite the blow for Everton.

Godfrey has arguably been the Toffees’ best player this season, largely due to his recovery pace and ability to make last-ditch tackles.

If the Englishman were to miss the game, Carlo Ancelotti would likely go with a central defensive pairing of Yerry Mina and Michael Keane.

Davies’ absence potentially leaves Everton with a midfield three of Allan, Gylfi Sigurdsson and Andre Gomes, or switching to a two-man pairing in the centre of the park.

Without the energy that Davies provides, the midfield could easily be overrun and cause issues in defence and attack.

Everton fans will undoubtedly have their fingers crossed that the pair will be fit for the pivotal match on Monday.