It’s the transfer deadline day and Arsenal are expected to be busy on the final day of the 2016 summer transfer window.

The Gunners may not sign any new player today but star midfielder Jack Wilshere is likely to leave the club on loan.

Here, we’re bringing you all the major Arsenal transfer news in the form of live blog / commentary covering the final few hours of the 2016 summer transfer window.

9:30 am: The Gunners have enjoyed a brilliant transfer window (probably their best in many years), but they are unlikely to add any new players today.

Here are all the signings made by Arsenal this summer:

However, there could be a few players moving out on loan, and one of them could be England midfielder Jack Wilshere.

Wilshere has been at the club throughout his career but recurrent injuries have hampered his progress in recent years. Arsenal are choc-a-bloc with world class midfielders at the moment, and Arsene Wenger cannot guarantee him regular starting berth.

He needs to play regularly again and the best possible scenario for him is to move elsewhere. According to reports from Sky Sports, Premier League clubs Bournemouth and Crystal Palace are looking to sign him on loan.

“The latest information I have is that Jack Wilshere’s five team shortlist is down to two. Last night we were told Wilshere was considering season-long loan deals from five clubs with three from the Premier League – Crystal Palace, Bournemouth and Watford – and two from Portugal, Sporting Lisbon and Benfica.

“We understand Wilshere will be choosing between Crystal Palace and Bournemouth. Wilshere had meetings with both clubs yesterday and informed them he would inform them of his decision at some point this morning. So it does seem inevitable that Wilshere will be leaving the on loan.”

According to reports from French newspaper L’Equipe, Spanish club Espanyol have made an approach to sign Debuchy on loan.

We will keep an eye on that as well.

According to Sky Sources, Arsenal and Werder Bremen are locked in negotiation over the permanent transfer of Serge Gnabry.

Gnabry has one year on his current contract and has no intentions of signing a new deal. Arsenal, likewise, are not keen to hand him a new contract as well.

11.33 am: Serie A giants AS Roma want Jack Wilshere

Seria A giants Roma are making a significant effort to sign Arsenal midfielder Jack Wilshere, who is likely to leave the club on loan today. Should he move to Roma, the England midfielder will be reunited with his former teammate Wojciech Szczesny (on loan from Arsenal).

A new twist in the tale! Serie A giants AC Milan have lodged a late bid to sign Arsenal midfielder Jack Wilshere. Bournemouth, Crystal Palace and AS Roma are also interested in signing the England midfielder on loan.

German midfielder Serge Gnabry has joined Werder Bremen on a permanent move from Arsenal. He has completed his medical. Here’s a picture of him holding the Bremen shirt after completing the move. 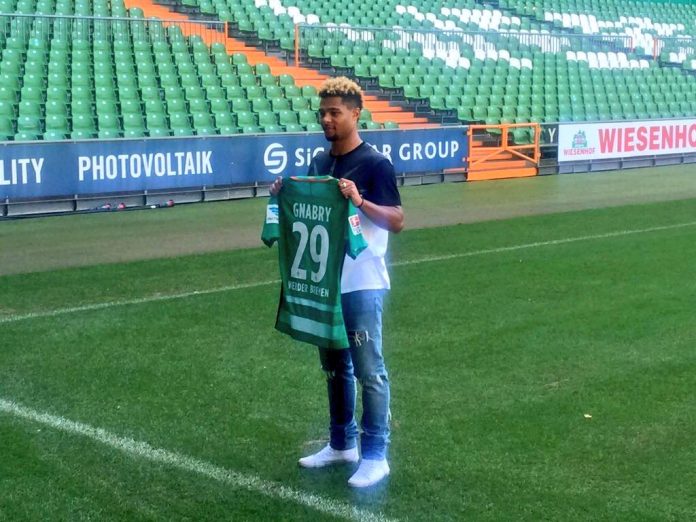 Bournemouth have signed Jack Wilshere on loan from Arsenal for the season. https://t.co/oJPQjsDXFC pic.twitter.com/I0TmdIbi5a

It has been a very good transfer window for the Gunners. They have addressed their weaknesses and have signed a midfielder, a striker and two very good defenders.

Furthermore, Arsenal have allowed talented young players like Jack Wilshere and Calum Chambers to leave on loan and get regular games under their belt.

The transfer blog ends here. Thank you, everyone, for reading the blog.