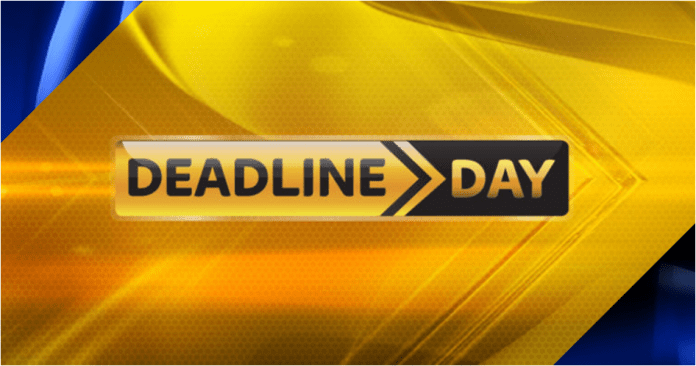 It’s the transfer deadline day and we’re bringing you a live event / commentary covering the final few hours of the 2016 summer transfer window.

Chelsea, Arsenal, Manchester City and other heavyweight Premier League clubs are in a rush to get the deals signed off and approved by the league.

06:20 am – Let’s start the day. It is approximately 17 hours to go until the window shuts. A quick recap of what’s in store for us:

Arsenal: The Gunners have confirmed the signings of Shkodran Mustafi and Lucas Perez from Valencia and Deportivo La Coruna respectively.

Centre-back Calum Chambers has been loaned to Middlesbrough and there are high chances that England midfielder Jack Wilshere could move away from Arsenal on Wednesday.

Chelsea: The Blues are close to sealing a deal for Marcos Alonso. The Londoners have already agreed to a fee with the Fiorentina defender, who is all set to undergo a medical today.

Antonio Conte is also keen to bring back former Chelsea defender David Luiz at the Bridge. According to Sky Sources, Chelsea have made £30m plus add-ons to Paris Saint-Germain to sign the defender.

Liverpool: No new signing is expected today but it could be a busy day in Merseyside, with several players likely to be loaned out today, including Mamadou Sakho.

Manchester Clubs: It’s going to be a relatively quiet day at Old Trafford but Man City will be busy sorting out transfer moves for one or two players.

Chelsea indeed have made a formal bid to sign their former defender, according to French publication L’Equipe.

Luiz has dropped down the pecking orders behind Thiago Silva and Marquinhos, but Unai Emery wants him to be a part of the squad.

Liverpool defender Mamadou Sakho has turned down moves to West Brom and Stoke City, per BBC.

The 26-year-old has been told he can leave the club on loan as he is not currently part of Liverpool’s first-team plans by Jurgen Klopp. [Click To Tweet]

Cristian Atsu’s agent has posted a picture on social media of him with the player on the pitch at St James’ Park. The deal will be announced shortly.

According to reports from Sky Sports, Sporting Lisbon have agreed to a deal to sell striker Islam Slimani to Premier League champions Leicester City. Fee £30m.

Sky Sports are reporting Spurs have lodged a formal bid for Newcastle United midfielder Moussa Sissoko. The North London club have submitted an offer in the region of £15-16m but Newcastle are holding out for a fee around £30m.

The Newcastle midfielder has been authorised to leave the France squad to complete his transfer to Tottenham Hotspur. He has reportedly left the French national team base in Clairefontaine to finalise a transfer move.

9:51 am: Another update on Sissoko

According to Sky sources, Moussa Sissoko will join Tottenham Hotspur today by the end of the day.

Newcastle are reluctant to sell him for anything less than £30m for the midfielder and latest reports claim that Spurs will accept five payments of £6m per instalment.

The midfielder has signed a three-year-deal with the Turkish outfit.

According to Sky Sources, Arsenal and Werder Bremen are in negotiations over the permanent transfer of Serge Gnabry.

Gnabry has one year left on his current contract. He has no intentions of signing a new deal and likewise Arsenal are not keen to hand him a new contract as well.

10:42 am: Liverpool miss out on Christian Pulisic

According to journalist Mike Keegan, Liverpool didn’t want to meet Pulisic’s asking price set by Borussia Dortmund. The player’s father also confirmed that the deal is off.

Borussia Dortmund’s asking price for Christian Pulisic appears to have scuppered a move to Liverpool. Clubs too far apart.

Manchester City defender Eliaquim Mangala will fill the boots left by Mustafi at Valencia. The French defender is currently undergoing a medical in Spain and the signing will be confirmed later today.

The day started with Spurs showing an interest in signing Moussa Sissoko. Newcastle wanted a fee in the north of £30m, while Spurs offered £16m.

Pochettino knows Schneiderlin very well having worked with him at Southampton, and now wants to bring him to White Hart Lane.

As of now, no formal bid has been lodged but Spurs have “asked intermediaries to test the water with United” but United probably won’t sell the 26-year-old midfielder on the deadline day.

Schneiderlin has only played five minutes of league football under new United manager Jose Mourinho this season, and he is behind the likes of Paul Pogba, Marouane Fellaini and Michael Carrick in the midfield pecking order at Old Trafford.

Ladyman claims that Pochettino will likely to monitor Schneiderlin’s position at United with a view to returning to the table in the January window.

12:10 pm: Manchester City’s Joe Hart joins Torino on loan for the rest of the season

Joe Hart, the Manchester City goalkeeper, has joined Serie A club Torino on a season-long loan.

“Suddenly my career has undergone a change and I interpreted it as a sign of destiny,” Hart told the club website. “So I had to do something…The choice of Torino has come at the right time.

“I am very happy to be able to compete in a beautiful and difficult league like Serie A.”

Manchester City have confirmed midfielder Samir Nasri has joined Sevilla on a season-long loan. The French midfielder is the third player to go out on loan today, with Joe Hart and Wilfried Bony having completed their moves to Torino and Stoke City respectively.

French defender Eliaquim Mangala has passed his medical at Valencia, enabling him to finalise his loan deal to Los Che from Manchester City.

Italian striker Mario Balotelli underwent his medical earlier in the day but there is still no agreement between Nice and Liverpool for the loan or permanent transfer for the striker.

Mario Balotelli underwent his Nice medical earlier but still no agreement between Liverpool & Nice for the Italian. https://t.co/WXAhcWxSRx

Mamadou Sakho has had offers across Europe, but the French defender wants to fight for places at Liverpool. He will stay at the Merseyside club.

Sunderland have announced the signing of defensive midfielder Didier Ndong from Lorient for €16m. The Frenchman has signed a five-year deal with the Black Cats.

#SAFC have completed the signing of midfielder Didier Ndong from Lorient for 16m euros. #WelcomeDidier pic.twitter.com/S2ptfgv5cw

Ndong: “It will be an honour to wear the Sunderland shirt and I will wear it with a true understanding of what it means.”

“I am excited to meet everyone at the club, to see the stadium and of course the fans…today is the most beautiful day of my life.”

15:40 pm: Still no agreement between Everton and Porto for Yacine Brahimi

That’s according to Ed Aarons of The Guardian, who claims Porto won’t accept for a fee anything less than €40m. We’ll keep an eye on that.

Robson-Kanu, a free agent, is currently on his way to West Brom for a medical and thereafter negotiate a transfer deal. The Wales striker has been given the permission to leave the squad, per Sky Sports.

Serie A giants AC Milan have lodged a late bid to sign Arsenal midfielder Jack Wilshere. Bournemouth, Crystal Palace and AS Roma are also interested in signing the England midfielder on loan.

✍ We’re delighted to announce the signing of Jeff Hendrick for a club-record undisclosed fee. #WelcomeJeff pic.twitter.com/t83fOmlXq2

Gnabry has joined Bundesliga club Werder Bremen from Arsenal on a permanent move.

Stoke City have signed Bruno Martins Indi on a season-long loan with a view to make the deal permanent. He becomes the second major signing of the day for the Potters, who signed Wilfried Bony earlier today from Manchester City on loan.

BREAKING | #SCFC sign Bruno Martins Indi on a season-long loan with a view to a permanent deal from @FCPorto pic.twitter.com/M5E8AOUsLb

#LFC can confirm that Luis Alberto has completed a permanent transfer to @OfficialSSLazio: https://t.co/azm3kAWjp5 pic.twitter.com/WNyJpOpcSI

17:06 pm: Eliaquim Mangala has joined Valencia on a season-long loan from Manchester City

19:44 pm: Tottenham have confirmed the signing of Pau Lopez

We are delighted to announce the signing of goalkeeper Pau Lopez on a season-long loan from Espanyol. #WelcomeLopez pic.twitter.com/xtZLZLbsCD

England midfielder Jack Wilshere has joined Bournemouth on a season-long loan from Arsenal.

French media RMC are claiming that Balotelli has signed a one year deal with Nice, however, according to L’Equipe the enigmatic Italian has signed a 3-4 year contract.

West Ham have confirmed the signing of former Liverpool right-back Alvaro Arbeloa. The Spaniard joins the Hammers on a free transfer.

? @MoussaSissoko has signed a contract with the Club until 2021 and will wear number 17! #SissokoSigns pic.twitter.com/uXr2239hI9

That’s it for the summer transfer window. No more deals can be announced, although players who are free agents can sign outside the window.