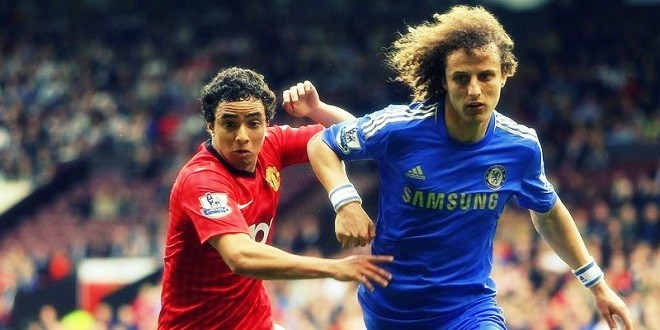 It was all over in about ten seconds, but Rafael’s red card against Chelsea on Sunday has proved to be a hot talking point in almost every sphere of footballing discussion. Managers, pundits, fans, and journalists have all waded into the debate over whether David Luiz, no stranger to controversy this season, instigated the sending off with a dive and a smile. 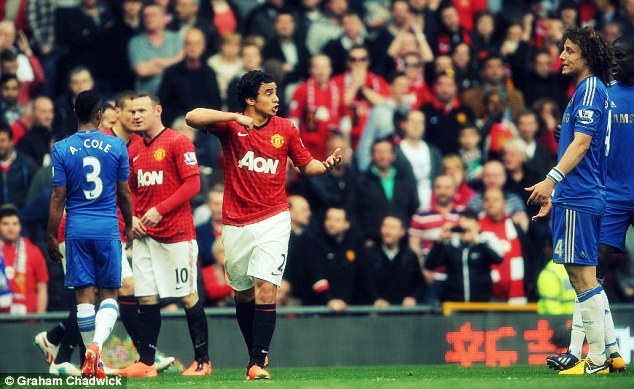 “[Rafael] retaliates but [Luiz] quite clearly elbows him twice.

“He then rolls about like a dying swan, and that convinces the referee. He was smiling. That is bad.

“What kind of professional is that?”

The ‘dive’ is one of the least loved features of the beautiful game. It rears its ugly head far too often; halting play, and giving referees incredibly hard decisions. It is difficult enough for the men in black to make the right call, the consistently right call, when players do their utmost to warp and twist their conclusions for their own means.

A real pandemic in many league competitions around Europe, there has been such condemnation of the fact in England, that players are vilified on almost a weekly basis. Even the PFA Player of the Year, Gareth Bale, has been branded a ‘cheat’ on several occasions due to some quite shameful examples of simulation.

But how does Rafael booting David Luiz in the back of the leg, with such contemptuous fury, lead for the media to condemn the Chelsea player as a ‘diver’?

There are many aspects to these ten seconds of, arguably, poor behaviour from both men to factor in. There is the fact, as Sir Alex points out, that David Luiz ‘clearly’ elbows Rafael; also, the now infamous smile on the face of the crumpled Chelsea defender as he clutched his leg; and the reasons for both players’ aggression in the first place.

Firstly, the ‘two elbows’ delivered from the Chelsea man are typical of the style of defending he has embraced. David Luiz is known as a clown in the Chelsea camp, and there is a plethora of footage to support this. But, on the pitch, he transforms from loveable into loathsome.

It is no coincidence that player after player lose their rag with Luiz, often choosing to vent spleen in most inadvisable ways. Sergio Aguero’s ‘assault’ on David Luiz only a few weeks ago typifies the reaction that the Brazilian provokes in 90 minutes from his opponents. 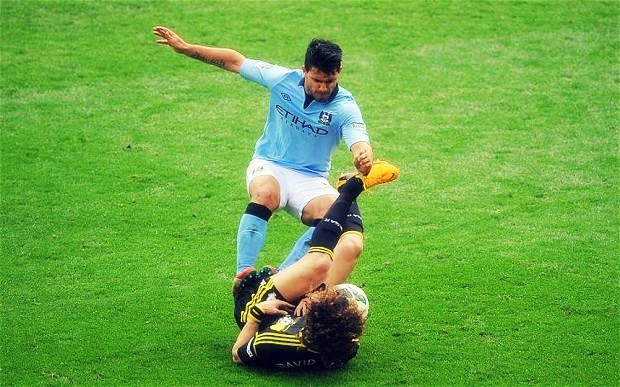 He is full of sneaky fouls, niggling kicks and shoves, and, as we saw on Sunday, sly elbows that are often missed by officials. Rafael could not have been overly perturbed by the impeding result, being 1-0 down at the time of the incident, as United had sown up the title weeks before the encounter.

No, it was the consistency of David Luiz’s sinister aggression that brought the right-back to boiling point.

Arguably, this is where the focus must remain; on the menace of David Luiz’s defending, rather than the reactions of the Chelsea man after the final blow.

In the moments that lead to the Rafael kick, it was clear to everyone that the Manchester United player was losing it. You could almost see the metaphorical red mist descend as he took aim with his right leg, aiming to connect with as much of his international colleague as he could, and with as much force. 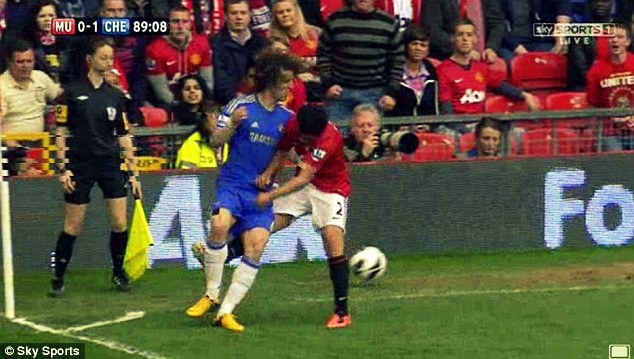 And if we could see it, no doubt David Luiz was preparing for it. He knew he had wound up the firecracker, and was about to receive the backlash.

The proof is in the clearance. David Luiz has a habit of belting the ball as hard as he can toward the front men, a habit that was spawned from waves of criticism over his tendency to try and dribble the ball up from the back, inviting opponents to knick it back in deadly positions.

Instead of launching the ball forward as he so often does, the defender back heeled the ball into touch, almost dancing as he did, so as to soften the impending blow.

As for the smile that has brought bitter outrage to much of the footballing community, I believe that this was not part of an elaborate play-acting performance; rather a look of bemusement, coupled with a patronising element. 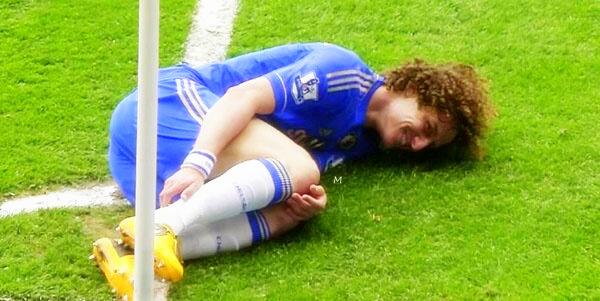 David Luiz lives and dies by his style of play, and knows full well that he will enflame and infuriate. But, this is his international teammate, and both are members of the Brazilian backline.

The whole incident from start to finish will have surprised David Luiz, who can’t have predicted his international teammate would have struck out as he did, despite the obvious aggression from the Chelsea defender.

Luiz has incurred serious scrutiny over the last year after some quite violent looking tackles, but he is always one to shake hands and apologise at the end of the match; for him it is just a game, regardless of how he treats others in the 90 minutes.

I think this, coupled with the unexpected nature of the passage, are the root emotions behind the ‘smile’. It is not a guilty smile, nor is it a disturbing by-product of trying to get a fellow pro sent off.

Further proof against the diving accusation can be found with the length of the smile. He makes no attempt to hide it, and even rolls towards the action, arms by his side. This is not Rivaldo vs. ball in 2002, this is not Didier Drogba vs. Barcelona in 2012, nor is it a piece from the ‘best of’ Sergio Busquets; nothing of the sort.

Surely, if he was screaming in agony, waving for assistance, or limping around like a ‘lame horse’, or like a ‘dying swan’ as Sir Alex so delicately put it, he would be so much guiltier? He has every right to go down after such a kick, and every right to hold his leg. What else would you have him do, Sir Alex?

Luiz himself had been wound up rather tightly before the clash, considering the manner of the yellow card he received not long before. Screaming, shouting, and gesticulating towards the referee after a contentious throw-in decision was given against him, it was no wonder that the Brazilian’s aggression had been ramped up, culminating in the touchline skirmish.

Now, I must finish by saying I am not advocating David Luiz here, in terms of his defending. I agree with the United boss so far as to say that the Chelsea defender provoked the tackle from Rafael, but I cannot see any real proof of diving. 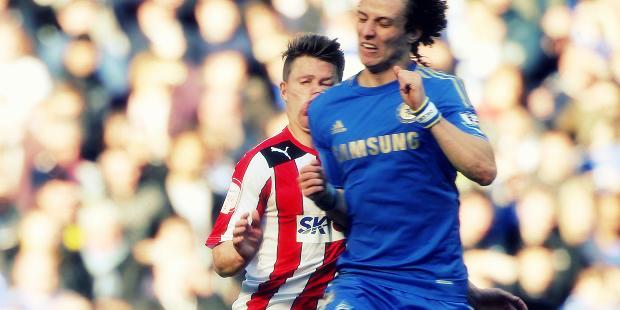 Luiz has a problem, one that could develop into serious issue if it continues, and that is his over-aggressive take on football. Sunday’s squabble, along with the Aguero reaction, and also the sinister pole-axing of Brentford’s Jack Reeves back in February, are helping the ‘David Luiz dossier’ become thick with unsavoury incident.

While I do not think David Luiz has to join the ranks of vilified play-actors in English football after this incident, I do believe he has to answer for the growing number of quite disconcerting examples of his play. He may be only one ‘bite’ away from starting a real inquisition.