Our thoughts to go Arsenal’s Eduardo da Silva, a talented young footballer who will miss the rest of the season (and maybe the rest of the year, what with rehabilitation and getting match-fit) and especially Euro 2008. Good luck with your recovery mate, get well soon. Also, props to Wenger for retracting his comments on Matt Taylor.

Stan Collymore says that the PFA are not doing enough to help footballers – Gordon Taylor blames Stan’s short memory as he claims to have looked after Stan regularly.

Really, that’s news now? Here’s a guy whose most famous moment in recent memory was being killed by Sharon Stone in Basic Instinct 2. That’s it, that’s what he’s done recently. Not to be crude, but giving him airtime is ridiculous.

What IS true is the amount of psychological and physical stress that the modern footballer goes through, and it would be good to give more airtime to player-support services instead of quoting this back-and-forth tripe.

And no, I don’t mean this sort of support…

I don’t see why Usmanov cannot get the 51% required come summer time. I’ve said this before – if the Arsenal board feel so strongly against him, they should find a way to buy up 50% themselves and thus directly prevent any type of takeover. Otherwise, Arsenal will be bought out sooner or later.

3. David James: No One Cares About The League Cup

I’ve always read Jamo’s column with interest – he’s not always right but he always has something interesting to say and he’s a fairly eloquent and intelligent bloke. His thoughts on how (and why) the League Cup is unimportant are more poignant given that he’s a footballer himself.

Perhaps we should get the Premier League teams out of the League Cup and leave it to the Football League? 🙂 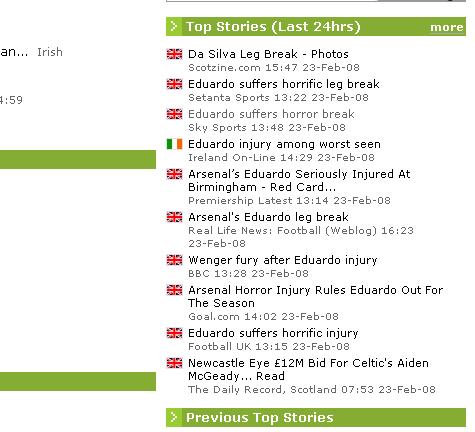 I know it’s serious, but come the fuck on!

Rafa Benitez is a fine coach, better than most. However, despite his team’s 2-0 win over Inter midweek (a flattering scoreline considering their inability to break down Inter till the last 10 minutes, despite the team playing with 10 men), European football is not vindication of his tactics. Not at all.

Rafa’s men do better in Europe because Rafa himself has confidence in battling it out in Europe. It’s not tactical superiority, it’s the manager’s confidence that imbues itself in the squad. You can see with Ferguson in the Premier League and in Europe – fantastic in the league but cautious in Europe. Wenger, same story – a tendency to get mentally stuck when faced with in-your-face, hard-and-fast football.

Liverpool? They may not fear Chelsea, but they definitely fear Arsenal and Manchester United, and that inferiority-complex plays a big role in those matches.

6. Too Much Money In Football?

Leaving aside the fact that nothing important has ever been done by committee, what exactly is the purpose of this ‘forum‘? I respect the sentiments behind the move but fail to see it’s purpose – or rather, it’s value. If football is to move forward and be responsibly commercialised, you don’t need to hear the self-interest of 100 people – you just need a few smart people at the top of the pyramid.

Unfortunately, I don’t have the confidence in the English FA to do so, and I doubt anyone else does either.

7. Where do footballers spend all their money?

Seriously, where does it go? Taxes? Shopping? Mansions? Prostitutes? Traveling? Gambling? I’d like to see some finances, please.

All the goals from the game, here.

And all the goals from the previous league fixture at Old Trafford, which United won 6-0, here.

Tottenham take on Chelsea at Wembley today – see how that turns out.