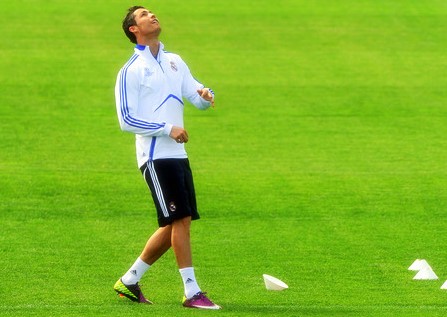 Real Madrid’s convincing win over Tottenham saw them cruise to the semifinals all thanks to the conman-like Jose Mourinho. But the upcoming month for the Galacticos is something like you have probably come across in FIFA or Football Manager. Back-to-back matches against the same opposition in different competitions.

Well, the video games have just been brought to life for Madrid and their opposition is none other than their arch rivals, Barcelona.

This weekend’s La Liga’s El Clasico is followed by the Copa del Rey final just three days apart. Another four days later, the two giants of Spain come face to face again as the capital club hosts the UEFA Champions League semifinals against Barca. And finally on May 3rd, the return leg will be played at the Nou Camp.

Heading into this tough couple of weeks, Cristiano Ronaldo was asked a few questions at the announcement of his first signature boots – the CR Mercurial Vapor Superfly III. Here is the interview:

Champions League, La Liga, the Copa del Rey final, possibly four clásicos in a row … what feelings and emotions come to the fore in these decisive months when everything is in play? Are you excited? Nervous?

I’m not nervous, no. I’m excited. It is the moment that we can win everything or not win a thing.

Has your preparation changed at all because of the importance of these games?

No. It has changed because of my injury. I work in a different way at the moment because I am injured; I am preparing according to my condition not according to the games coming up. But I now feel fit and ready.

Do you watch opponents? Do you alter your game according to who you are up against?

No, I always try to do the same things. It doesn’t matter which teams we are up against or how they play, I always do the same. One thing is a match on paper, another is the game itself. It is completely different, so you can’t alter things – the theory is not always the same as the game. I just do what is the best to help the team.

Does training change in these months of big matches?

What I have done well, I try to maintain. I always do things the same way if they work – and I don’t mean all season long, I mean always, every single season. I worked the same at the age of 17 or 18 as I do now at 26. If things go well, I stick to that. I always do the same.

When you look back on games you watched as a kid, are there any that stand out? Are there games that inspired you?

The World Cup in 94 that goal when Brazil won the tournament. I remember watching in Madeira with my family and we were supporting Brazil. That was good memories. That gives me good things: you always look for the best games and tournament to inspire you. That was very, very good for me.

How fit are you for this key month?

I feel well now. I have been running, I feel very, very good. I want to look forward to being back on the pitch. When you don’t play you miss it. I missed one or two games for Madrid and for the national team. I don’t like to be at home and going in the afternoon and the morning for treatment – it is boring. I prefer to play.

Mourinho has talked about the tiredness of the squad, with so much travel and so many games. How do you see it?

Which players have most impressed you at Madrid this season?

The most impressive: Marcelo has done very well. Ozil, for his first year, has been fantastic. Pepe has played well. Carvalho.

What about for other teams?

Honestly, I haven’t thought about them. But many impress me. I am happy that I play in the most competitive and strong league in the world. I play against many, many good players.

You say Spain is the strongest league in the world: how does it compare to England?

For me, they are the two strongest leagues for sure – the Premier League and Spain.

What are the differences between them?

In Spain it is more tactical, the players have more quality to keep the ball. But in England I loved it too: it is stronger. It is quicker than here. The leagues are similar in some respects and different in others; they’re the best leagues, for sure.

You’re scoring an astonishing number of goals. How much do goals motivate you? Are they a key part of your objective?

Not really. I always try to score goals and play well and help the team, or to provide assists. I don’t think: ‘I have to score every game’. If you think like that, you don’t score goals. Goals come naturally with your talent, with your quality, so I don’t worry about that. If you and the team play well, that happens naturally.

You’re a great athlete. Do you do a lot of extra work beyond the Real Madrid training pitch?

Not a lot. Just training, and I do like to maintain my body because it is a very important part of my life. But I am not too worried about that – I don’t eat chips or things like that. But mostly I do eat what I want. I don’t have a problem with being fat, my genetics are good. But I do work at it, yes.

You seem to enjoy the physical battles. But do you think defenses go too far in kicking you and committing fouls?

Sometimes, yes. I am tired of talking about: ‘they have to protect me, they have to protect the players …’ The refs try their best. Some players just try to stop me with fouls: if they do not foul me they can’t stop me. I don’t care. Players don’t try to hurt you, they try to play normally or honestly and I am not that worried about it.

Is it vital to win something this year?

It’s important of course. I cannot see Real Madrid go two or three years without winning anything. When you talk about the biggest club in the world, or maybe one of the biggest, they have to win. Last year we didn’t win anything but this year and next I hope we can – we have fantastic players and a fantastic coach.

Are you stronger now in this second season?

It’s different. Your first year is about adaptation, because the football is different, everything changes. I felt I did well last season but this season I am a bit better. I have been here for a year and a half, I know the league, the adaptation is more complete – I feel more comfortable and things then come more naturally.

How important is Mourinho? Is he a key part of your success?

Of course, yes. He is an experienced coach, the titles speak for him. He has won everything. I am really, really happy that he is here with us and I hope that we can win lots of things together.

Are you a football fan? Do you watch loads of other matches?

I am not a big fan to stay at home all afternoon and watch four or five game. My brother does that but I prefer to play. I like to watch Real Madrid games if I am not playing, but I can’t watch other games. It is not that I don’t like football, but I don’t watch too much. I like Madrid matches, big games.