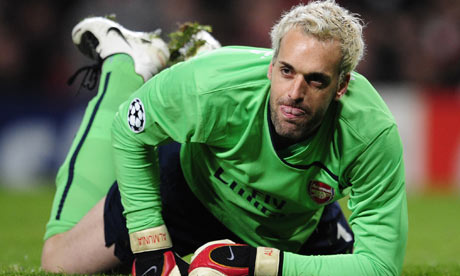 Hansen was very old school in his analysis of the Arsenal West Brom game on Saturday’s Match of the Day. When swinging into his usual tactical musings, he explained that West Brom, more so then Arsenal were organised defensively, had leadership, organised themselves where Arsenal did not.

Mostly this is fair enough. Hodgson may have had a bad time at Liverpool, but one thing he rarely does is lose goals like the shocker Arsenal conceded to put West Brom 2-0 up, let alone concede shockers like that twice in three weeks. (Sorry for reminding you about Birmingham again Arsenal fans.) In doing so, Arsenal manage to shoot themselves in the foot time and time again.

But unqualified as I am I do disagree with one point Hansen made, and that was his point regarding comparatively, Arsenal and West Brom’s defending positions on corners. West Brom, Hansen argued, used their centre backs better at corners by playing them in the area on the edge of the 6 yard box that defending teams don’t want attackers to win headers in, along with another tall player. (Like, in West Brom’s case, Scharner.)

Arsenal on the other hand, didn’t do this. The central defenders in fact took up completely different positions – one at the near post and further toward the back post. According to Hansen this cost Arsenal the opening goal, and it’s an understandable claim – West Brom pulled two defenders away, Arshavin completely let his player go on the edge of the box and West Brom powered into that central area, Steven Reid doing the simple but vital bit of powering the ball past Almunia with his noggin. In fact, Hodgson and Arsenal have history with this tactic – Hangelaand scored a very, very similar goal for Fulham when they beat Arsenal in the opening stages of the season three years ago, a result which kick- started Arsenal’s season of complete mediocrity in 08-09.

As Hansen went on to say, ‘it’s not good enough’, and he’s right. For the wrong reasons. It wasn’t Arsenal’s style of defending that deserted them for the first goal, it was Almunia. Yes, he was at fault for both goals (Not the greatest shock to be fair).

West Brom’s defending was perfectly well and good – as Hansen said, it covered the main area of danger – the central space in front of the six yard box which an attacking player could arguably run into and bullet a header into the back of the net. Fair enough. But, shock of shocks, there are other angles to attack from.

An attacker (Number 1 in the picture, left) can just glance a fizzing, quick cross past the keeper, or nod the ball on for an attacker waiting at the back post. Or an attacker (Number 2) can drop to the back post, the cross floating over everyone’s heads and leaving an attacker to nod the ball back to the near post again, or an on-running attacker at the far post. Now don’t get me wrong, of course West Brom have players manning these positions – but they are not the aerially powerful defenders or the combative midfielder. The overstocking of this central area by West Brom arguably makes them more vulnerable in these wider areas.
Then there’s Arsenal’s approach – one defender at the near post and one defender at the back post. One defender to intercept a quick ball to the front post and one to hang closer to the back post in the event that a cross is floated there. Arsenal, in other words, dedicated their defending assets to the wider areas of threat – a different style to Fulham’s and one that leaves more threat in the central area. Right?
Well no. Because Arsenal used shorter players to cover the centre, there is a benefit for more aerially powerful players, such as Manuel Almunia. It gives more power to him to command that area – whereas the very best goalkeepers in the world cannot possibly hope to command the near and far posts with any great success rate. Arguably, Arsenal’s system has the potential to be better then West Brom’s – covering all the areas of danger, albeit thinly.
Alas, if only Almunia hadn’t completely frozen. Where those central players needed his help, Almunia did zip. So Arsenal’s system of defending was ridiculously exposed. Alas, another fairytale of Arsenal’s has an unhappy ending. Still, I rest my case. Arsenal weren’t simply defending badly. They were defending ambitiously. Badly.