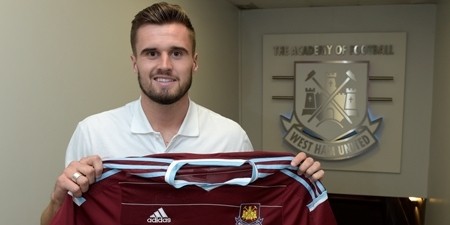 Arsenal have sent young defender Carl Jenkinson out on loan to West Ham, the 22-year-old to spend a season across London at Upton Park after several arrivals at the club.

Jenkinson, with the Gunners signing both Mathieu Debuchy and Calum Chambers this summer, has found himself down the pecking order at the Emirates stadium, and will now look to impress out on loan at West ham.

Known for his love for the club, making him a firm favourite among Gunners fans, Jenkinson played 14 Premier League games for Arsenal last season,

“It’s brilliant how it has turned out and I just want to thank the Gaffer and Mr Sullivan and Mr Gold because they put in a big push to get me here,” Jenkinson told the West Ham official site.

“I’m clearly seen as a big part of things here and hopefully I can prove my worth here because it is an important year for me. 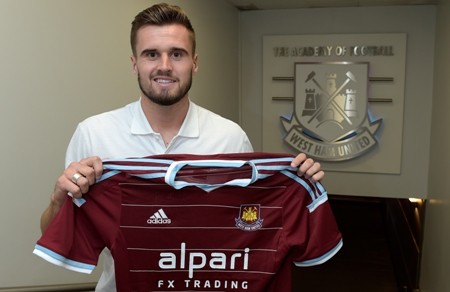 “I was flattered to have a lot of options but, deep down, if I was being honest with myself West Ham was always the place I wanted to go to.

It’s one of them where I wanted to do the right professional thing and consider all the options, but in the back of my mind it was always West Ham and I’m just so glad it’s all worked out how I wanted it to in the end.

“It will be brilliant to play here. I’ve got a lot of friends who are West Ham fans and I know how good the supporters are here. I’ve played here a couple of times so I know exactly what it is all about, so it’s going to be fantastic to be a part of that, to be honest.

You get a great atmosphere here and the fans are great, so I just can’t wait to get a West Ham shirt on and get on the pitch and play. This is an exciting time for me, it really is.”