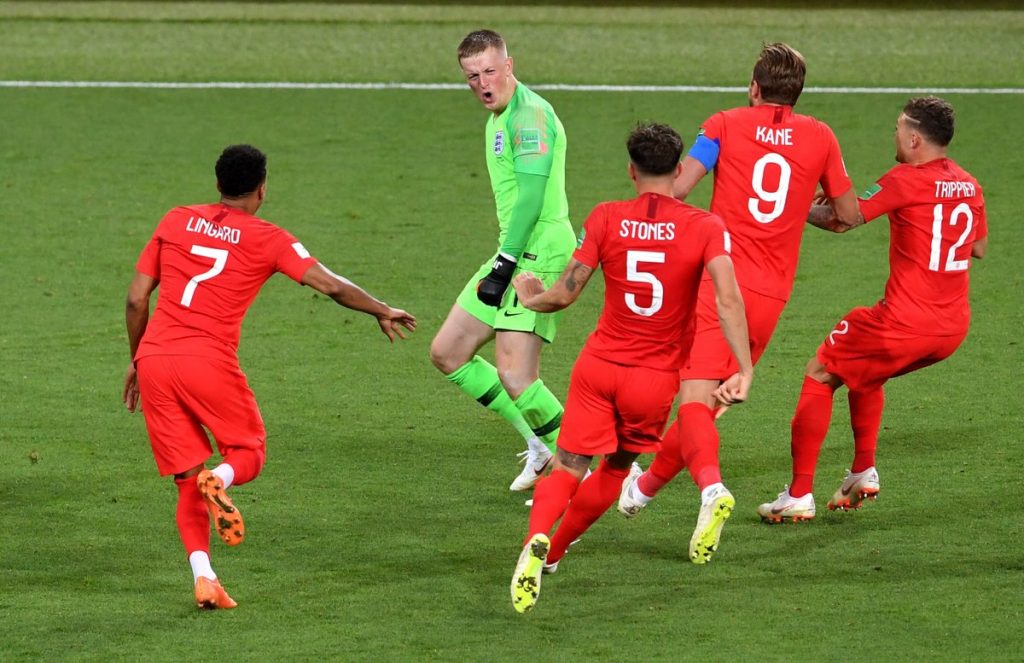 England booked their place in the Quarter finals of the World Cup after a sensational penalty shootout win over Colombia last night.

The Three Lions took the lead around the 57th-minute mark but Colombia managed to get back into the game thanks to a superb goal from defender Yerry Mina.

Both teams tried to break the deadlock in extra time, but the defences stood firm. Eventually, the game was decided on penalties and Jordan Pickford produced a memorable display for England.

The Everton star was criticised for his showing against Belgium earlier in the competition and he has surely silenced his critics with an imperious display last night.

1998 – Jordan Pickford was the first England goalkeeper to save a penalty in a penalty shoot-out at a major tournament since David Seaman at World Cup 1998 against Argentina. Crucial.#COLENG #ENG #WorldCup #ThreeLions pic.twitter.com/qdwp7zRezO

Chelsea star Thibaut Courtois mocked the England international for the goal he conceded against Belgium in the group stages of the World Cup.

Not only did he save a crucial penalty in the shootout, he managed to keep the scores level during normal time with a fine save off Mateus Uribe.

Here is how Twitter reacted to Pickford’s performance last night.

Only Everton and Sunderland fans are allowed to enjoy that Pickford save. The rest of you shitheads wrote him off. How big his arms now? Moved his feet enough? Get to fuck hypocrites.

Jordan Pickford covered 7468m during the win over Colombia. By far, the most of any goalkeeper during the finals. #ENG #EFC

Brilliant Jordan Pickford what a great result it’s about time we won a shootout! Eat your heart out all the Pickford doubters we have won a shootout!!! We can go to the final now because we can only get better! Well done Gareth Southgate your team did you proud!!

Pickford hasn’t received anywhere near enough credit for this save… pic.twitter.com/i9e2Y33tcA

A word on that Pickford penalty save. Mostly when a keeper saves a penalty it’s because they guessed the right direction. But in this case, a lesser keeper goes under the ball and doesn’t save. The reflexes and strength to keep that out – magnificent.

Well done lads. Chuffed to bits for Jordan Pickford. I’ve no idea why he’s been taking flak. I thought we all wanted England to win this? That means supporting the guys. ?????????.

Let’s face it. This was the real moment England ??????? won the game. Amazing save by #Pickford which we never saw a replay of #ENGCOL pic.twitter.com/0zpdPL27jA

Let’s not forget the save of the tournament. Unfortunately didn’t get replays. Just before Colombia equalizer. Ridic. #EnglandvsColombia #Pickford #worldcup pic.twitter.com/FJ8aLjWvBZ

Ecstatic for @JPickford1 – What a way to shove 2 fingers up to the few critics. https://t.co/DbO6hzoz67

Get in. Delighted for Pickford. The hero in the shootout. Made a world class save in normal time too.

Pickford obviously the hero but the absolute balls (technical term) on Marcus Rashford to step forward at his age.