Chelsea’s capture of Hazard a serious statement of intent 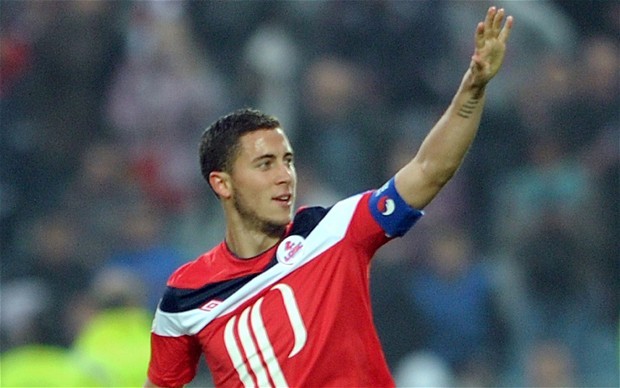 Highly-rated Lille attacking midfielder Eden Hazard has revealed that he is ready to join Chelsea next season, despite interest from both Manchester United and Manchester City. The Belgium international has been a leading light for the Ligue 1 outfit over the last 24 months, and will move to Stamford Bridge in a £32 million deal once the transfer window reopens. It had looked for all money that Hazard would end up at one of the Manchester clubs next season, however as the Old Trafford and Etihad Stadium outfits toiled in their pursuit, Chelsea acted swiftly to assure the playmaker’s signature.

Roman Abramovich has reportedly dealt with the transfer personally, stepping in to orchestrate the deal in the absence of a full-time manager. Both Manchester clubs, especially United, will be rueing their lack of urgency in trying to complete a deal for the starlet, and Hazard’s move to Chelsea will act as a warning that next term will not be the two-horse race for the title that 2011-12 became.

Chelsea may well have won the Champions League this term, but the Blues have come under criticism for their negative style of play and lack of attacking intent. This is being remedied in the transfer market, with Hazard, Kevin De Bruyne and Marko Marin all on board for next term. All three players will challenge for a first-team spot, and give the side options of attacking midfielders that can change a game. Hazard’s arrival will make Chelsea a different proposal next term, as their traditionally direct approach could well be given some panache by the skill and creativity of the Belgian alongside Juan Mata and Daniel Sturridge.

Next on the Blues’ hitlist is a new big-name striker to complete their attacking overhaul, replace Didier Drogba and compete with Fernando Torres for a starting berth. Hulk is been linked with a £30 million move, and would provide the strength in depth necessary for Chelsea to challenge next term. If the Porto man’s acquisition is not sealed a raft of other big-money pretenders have also been earmarked, including Radamel Falcao and Edinson Cavani.

Hazard’s capture shows Chelsea’s intent to get back into title contention, and the Belgian superstar will not be the last new face to join the Stamford Bridge club this summer. The final jigsaw piece for Chelsea to really get back into the mix is a new permanent manager, with Roberto Di Matteo’s heroics in delivering a Champions League and FA Cup double seemingly not enough to get him the position on a full-time basis.

The fact that Di Matteo has not already been confirmed as the club’s full-time manager is bewildering given the Italian trainer’s rejuvenation of the side since replacing Andre Villas-Boas. Abramovich is obviously biding his time to get a bigger and more experienced name into the Stamford Bridge hotseat, however who exactly this will be is yet to be seen.

One has to wonder however what will get the next Chelsea manager more than one season in charge and satisfy Abramovich’s ambition; Di Matteo has won the Champions League and is not being given a second term. With Hazard’s signing and the continued expenditure on the playing squad, the expectations on the next Chelsea manager will be monumental. The next Blues boss may well have quite the squad at his disposal, but the weight of expectancy attached to the role means there is very little room for error in as competitive a Premier League as there has been in some time.