Two London sides meet at Wembley for the Capital One Cup on Sunday as Chelsea face Tottenham Hotspur in a rematch of the 2008 final.

Tottenham were victorious as underdogs that day and they will be underdogs again this weekend despite a 5-3 win over Chelsea at White Hart Lane on New Year’s Day.

Chelsea will have had a much longer rest having not played since their home draw to Burnley last Saturday, whilst Tottenham were beaten 2-0 at Fiorentina in the UEFA Europa League on Thursday.

Nemanja Matić misses the final through suspension after being shown a straight red card less weekend for a shove on Burnley’s Ashley Barnes. The FA rejected Chelsea’s appeal during the week.

One potential replacement for Matić would have been John Obi Mikel but the Nigerian is the only injury José Mourinho has to deal with.

Mauricio Pochettino has a full squad to pick from. 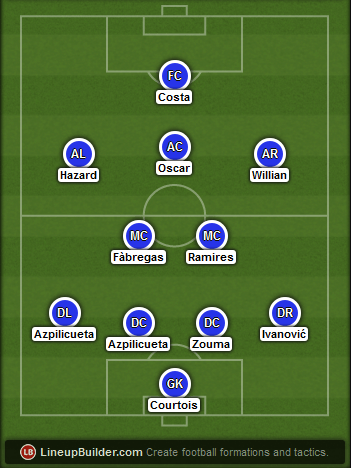 We think Kurt Zouma will come in for Gary Cahill after the England international was part of the defence that conceded five to Tottenham last month. The French defender appears to be neck-and-neck in Mourinho’s decision-making over the pair in recent weeks. Ramires is the obvious replacement for the suspended Matić, and with Mikel injured. The front four should look like this with Juan Cuadrado yet to set the world alight in his couple of appearances. 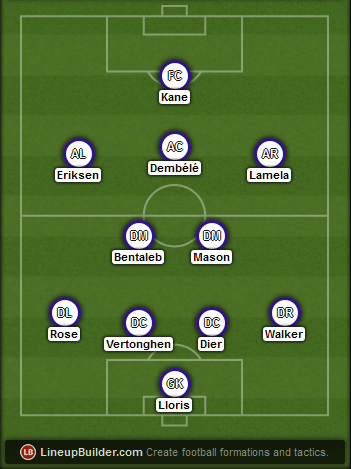 This has been Mauricio Pochettino’s favourite team in recent weeks and with everyone available we don’t see why anything will change. On paper, the defence does not look so good, and they did concede three the last time they played Chelsea. Ryan Mason works his socks off in front of them. Christian Eriksen works his magic from out wide these days whilst Harry Kane is a man on fire. Expect Mourinho to try cut off his supply with a specific gameplan for the young Englishman.

Eden Hazard vs Kyle Walker
Kyle Walker faces a tough test versus the Premier League’s best and Eden Hazard has been in fine form this season. Watch for the Belgian to drift into the middle too to cause problems for the likes of Eric Dier, Jan Vertonghen and Nabil Bentaleb. On the opposite flank, Willian should taste some success versus Danny Rose who has been the weakest part of Tottenham’s defence this season.

Harry Kane vs John Terry
Harry Kane scored a brace in the last league meeting between these two and has been one of the best Premier League players so far in 2015. Chelsea will have learned from that last meeting to close him down quickly in and around the penalty area as well as challenging him aerial – basically, don’t give the young Englishman a site on goal. John Terry’s a clever player who will do his best to get in the way of any shots, whilst Ramires could drop back into man marking.

Diego Costa vs Eric Dier
Chelsea have a lot of talent going forward and although Diego Costa hasn’t heavily featured amongst the goalscorers of late, Tottenham cannot afford to take their eye off him. With the likes of Hazard, Oscar, Willian and Cesc Fàbregas creating chances for him, the Spaniard may only need to break free of his marker once to find the back of the net.

Prediction: Chelsea 2-1 Tottenham
While Chelsea’s form isn’t too great of late but you can expect José Mourinho’s side to be prepared for this one. Look for the Blues to tighten up at the back in this one. They were rocked by the first goal last time so you can expect them to be sturdier this time. Tottenham are winless in their last four in all competitions since the North London derby at the beginning of February.