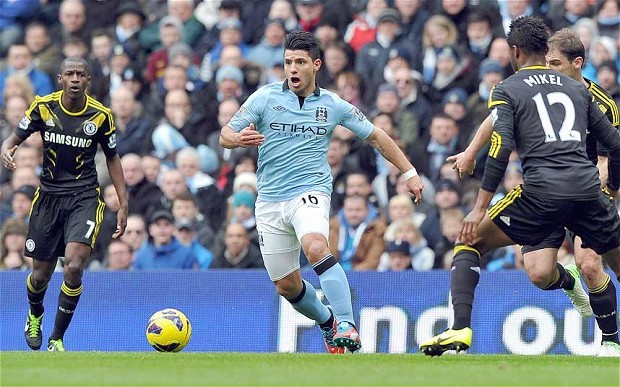 Join Tipleaders.com today to compete with the best tipsters and earn cash!

Chelsea and Manchester City are coming off midweek away wins in the Champions League and will look to put down an early season marker in Sunday’s clash.
With only a point separating the sides, a win here for either would be a real boost.

Jose Mourinho’s men are starting to improve their performances, and have been getting on with business over the last month. The west London side beat Schalke 3-0 in midweek, making it four straight wins in all competitions.

Importantly, Chelsea seem to have re-found their scoring touch of late after not setting the world alight in the early exchanges of the new season. 14 goals in four games is a statement of intent, and the Blues will look to continue that here.

Fernando Torres bagged a brace in the victory in Gelsenkirchen, and will more than likely be given a chance to prove himself once more. In behind the Spanish striker, Oscar and Eden Hazard look sure to play; whether it is Andre Schurrle or Juan Mata as the third part of the trident remains to be seen.

At centre-half, Gary Cahill got a run in midweek, and again it will come down to Mourinho’s preferences whether he continues in the side or is replaced by David Luiz. At left-back, the hosts will hope to welcome Ashley Cole back to the team, but if the England man is not fit to play Cesar Azpilicueta should continue on the flank.

Like Chelsea, City are starting to ramp up their performances after a questionable start to the season and beat CSKA Moscow in midweek, 2-1.

Their last league outing saw the side pick up their first away win of the campaign at Upton Park, beating West Ham 3-1, and Manuel Pellegrini will be keen to make it two in a row on the road.

The big question for City will if their defence can hold up in Vincent Kompany’s absence. The Belgian talisman missed the trip to Russia and according to Pellegrini is due to miss the Sunday game as well. Hi absence could well be difference between victory and defeat for the visitors.

In attack, Alvaro Negredo and Sergio Aguero have started to click and are now seemingly Pellegrini’s first-choice pairing. David Silva has also been showing glimpses of what he is capable of again.

Yaya Toure was the victim of racist chanting by the CSKA fans in Russia, and it will be interesting to see how he reacts here. The Ivory Coast international is almost as important to City as Kompany, and his battle with Ramires should be great viewing.

These two have met 132 times over the years, with Chelsea winning 52, City winning 44 and 36 draws. Interestingly, City have not been beaten by Chelsea in the last five competitive meetings between the sides.

Both sides are in good form. Chelsea have won six out of their last seven games, with one draw, since losing at home to Basel in the Champions League.

City were beaten twice in a row against Aston Villa and Bayern Munich, but have made amends of late by winning their last three games.

This really could go either way, with two very evenly matched sides. There should be goals in the game, and a 2-2 draw looks like a clever bet. For more good tips, View tipleaders free betting tips for Chelsea vs Manchester City.