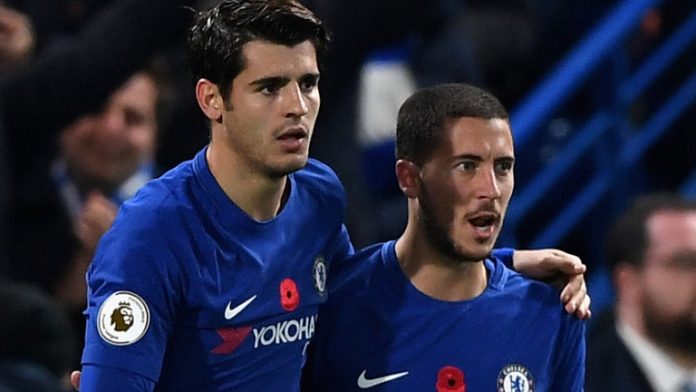 Chelsea welcome Arsenal to Stamford Bridge on Saturday for a clash that promises to be an early season Premier League blockbuster.

The two sides enjoyed contrasting fortunes on the opening weekend of the campaign, with the Blues winning comfortably at Huddersfield Town while Arsenal lost at home to Manchester City. Read on as we look at five things to watch out for on Saturday evening.

Alvaro Morata was largely anonymous for Chelsea last weekend and his place in the starting XI must be under huge threat.

Maurizio Sarri may play Eden Hazard in a ‘false-nine’ role, with Pedro and Willian deployed on the flanks.

Hazard isn’t the answer in that position on a long-term basis, but he is currently a much better option than the disappointing Morata. The Spanish forward has flopped at Chelsea and a move elswehere appears inevitable.

Strengthening the spine of the team has been something Arsenal have needed to do for years and Lucas Torreira’s signing from Sampdoria will certainly help to address that.

The 22-year-old was only named on the bench last weekend, but he showed enough against City to suggest he will become a key part of the team.

Torreira is a serious upgrade on the likes of Granit Xhaka and the sooner manager Unai Emery gets him in the starting line-up the better.

Jorginho and Kante will shine

N’Golo Kante has been the star of the show in Chelsea’s midfield for the last two seasons, but Jorginho’s arrival this summer supposedly put his place under threat.

However, they linked up to good effect at the John Smith’s Stadium and will only get better as the season progresses.

They may find things tougher against Arsenal, particularly if Torreira plays, but the pair will be worth watching on Saturday.

It was no surprise to see Alexandre Lacazette named on the bench against City, but his performance in the second-half of that game has given Emery a selection headache.

Lacazette and Pierre-Emerick Aubameyang showed last season that they can play well together and the Gunners boss has nothing to lose by unleashing them against Chelsea.

Arsenal won’t win the Premier League this season, so they might as well have a proper go this weekend.

David Luiz made his first top flight start since February last weekend and helped the Blues keep a clean sheet.

He is likely to face a much tougher challenge against Arsenal, with the likes of Aubameyang a huge step up in quality from Huddersfield’s powder-puff attack.

The 31-year-old isn’t everyone’s cup of tea defensively and it will be interesting to see if he can produce the goods against the Gunners.