With two official matchdays remaining in the season, Chelsea’s Diego Costa has strengthened his grip on the top spot of the Most Valuable Offensive Player (MVOP) rankings. This doesn’t mean it’s a lock though. 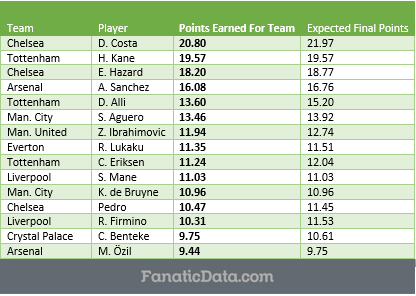 Both, Tottenham’s Harry Kane and Chelsea’s Eden Hazard, continue to remain close to Costa. Both players have 3 matchdays remaining and stand a goal away from potentially taking over first place. While Hazard has shown the ability to earn points with his offensive play for Chelsea over the past 5 matchdays, the same cannot be said for Kane.

Despite being involved with Tottenham’s goalscoring since returning from his injury, Kane has been a part of only one goal that has earned his side points since Matchday 28. This has caused Kane to lose ground against Costa.

The other thing not going in Kane’s favour will be the remaining matches for both sides. All of the remaining opponents for Chelsea do not have anything to play for which will likely result in Chelsea taking care of those opponents with ease. On the under hand, Tottenham has matches remaining against Manchester United and a Hull City team that will be trying to avoid relegation.

What will be interesting to see is how Chelsea boss, Antonio Conte, reacts if Chelsea is victorious in its next matchday. By securing the Premier League, Conte could rest Costa and Hazard for the remaining two matchdays giving Kane a golden opportunity to make one last attempt at the MVOP crown.

We determined the Most Valuable Starting Squad through Matchday 36 utilising the most commonly used formation in the Premier League: 4-2-3-1 (excluding goalies). 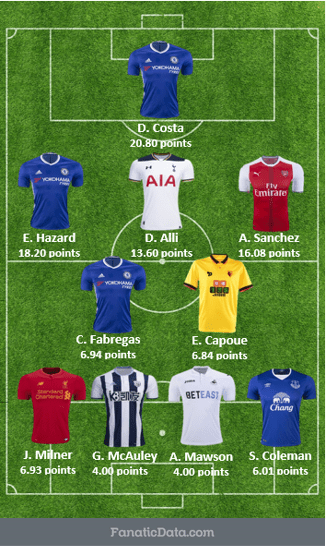 Finally, after several matchdays of failing to earn a single point, Manchester United’s Paul Pogba was replaced as one of the top point earning midfielders in the EPL by Chelsea midfielder Cesc Fàbregas. It is the first time Fàbregas has made the Most Valuable Starting Squad this season. All other positions remained unchanged since the last matchday.

Check back after Matchday 38 to see who will be crowned the MVOP of the 2016/17 English Premier League. We will also announce the Most Valuable Starting Squad of the season.