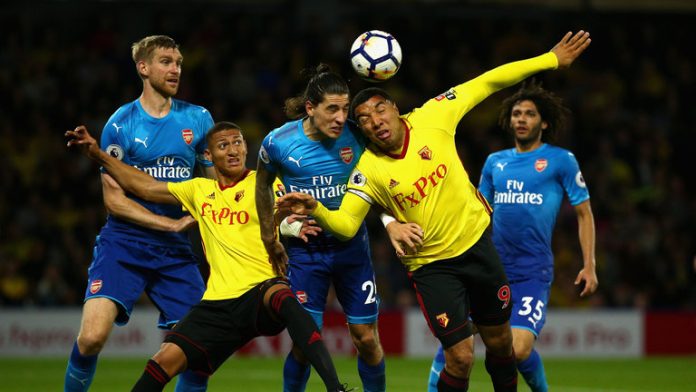 Deeney infuriated Arsene Wenger by accusing Arsenal of lacking “cojones” after inspiring Watford to a 2-1 victory over the Gunners on Saturday.

Lampard says Deeney’s comments were fully justified and he insisted Arsenal are a soft touch.

“I was surprised by Troy Deeney speaking so openly about Arsenal’s deficiencies, but not by what he actually said,” Lampard told the London Standard.

“People have discussed Arsenal’s lack of backbone, the type of players in their squad and whether they can take on a battle for a long time – and nothing has changed.

“I don’t think they have strengthened in the right areas year-on-year.

“They have been two or three players short of a team that can handle physical matches, which is what you need if you’re going to win the league or challenge for the Champions League, for more than a decade.”

The result took Watford into the top four in the Premier League, two points ahead of Arsenal with eight games played.

Wenger’s side have repeatedly been accused of not having the stomach for a fight and Lampard believes Sunday’s performance proved that is still the case.

“We all like to see great football, but when the going gets tough, there will be certain players you want to stand up to the challenge,” he said.

“Arsenal have consistently bought the same type of player when they have been crying out for centre-halves and midfielders who meet that challenge.

“Troy’s comments should annoy the players. If I was them, I would be angry that those comments are out there and that so many people agree with it.

“But they can’t just have a reaction against Red Star Belgrade in the Europa League on Thursday. It has to be every week.

“The problem is, if it’s not in you as a player or as a squad, that toughness, that resilience, is quite hard to fake every time.

“They need to respond, but we are back to the same place with Arsenal – you can call it every year. They go on a run and then suffer a setback. There are too many false dawns.”