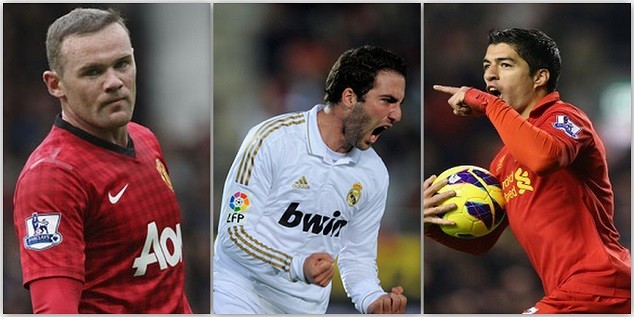 It seems like cross town rivals Chelsea and Arsenal will battle each other out in the summer transfer window, as both the London clubs are in a tug-of-war for three quality strikers – Luis Suarez, Gonzalo Higuain and Wayne Rooney.

Both Arsenal and Chelsea have registered an interest in Liverpool’s talisman striker Luis Suarez, with the former having lodged a bid in the region of £30 million, which was rejected immediately.

Though Chelsea’ interest in the player has cooled down a little bit, in recent weeks, it does not necessarily pave way for the Gunners, as the Reds are steadfast in their decision that the Uruguayan will not be sold in the summer.

The North Londoners are told to cough-up at least £10-15 million more to even enter a negotiation and the onus is now on Arsene Wenger – whether to spend more than 50% of the reported transfer budget (£70 million war-chest given to him) on one single player only.

Further, La Liga giants Real Madrid are also keen to get hold of the Uruguayan and might table a handsome offer, making it difficult for Liverpool to refuse.

For that matter, given a choice, Liverpool would consider an offer from Madrid than Arsenal or Chelsea, as they are reluctant to sell their prized asset to any rival Premier League clubs.

Talking about Real Madrid, Arsenal could also miss out on striker Gonzalo Higuain as the Spanish club are playing hardball over the transfer. It was understood that the Gunners had agreed a personal deal with the Argentine, but since the appointment of Ancelotti, Madrid have altered their valuation of the player.

To make the matter interesting, Jose Mourinho is also ready to throw his hat into the ring, to sign the striker, with whom he worked three years at the Bernabeu.

Over to Manchester, where Wayne Rooney’s future continues to dominate the headlines of the back-pages of English media, as both the London clubs are desperate to prize him away, with the striker increasingly getting disillusioned with life at Old Trafford.

It is understood that the 27-year-old is “angry and confused” with the latest comments from his manager, where he was told to play the role of a second-fiddle to Dutchman Robin van Persie.

Rooney, unwilling to accept the bit-part role is looking to move elsewhere, with Stamford Bridge his preferred destination.

Chelsea have claimed publicly that they have lodged a bid for the Englishman and though it was rebuffed could yet put together another offer in coming weeks. Arsenal have also joined the chase, with Wenger insisting that the Gunners can afford to pay Rooney, despite him earning £250,000 a week.