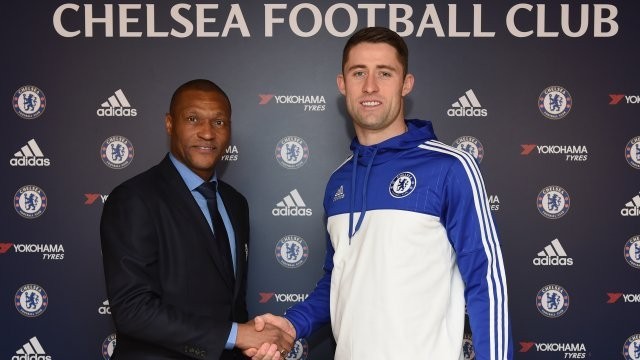 The Premier League champions confirmed on their official website that Gary Cahill has signed a new four-year contract, keeping him at Stamford Bridge until 2019.

The 29-year-old is a key member of the Chelsea dressing room since arriving from Bolton back in 2012.

Cahill said: ‘I’m really pleased to commit my future to Chelsea and it’s great the club has put their faith in me.

‘I have achieved a lot here and I hope I can keep on learning, helping the team and lifting trophies over the next four years.’

Cahill has won every major honor with Chelsea since his move.

The England international helped Chelsea win the Champions League and FA Cup at the start of his Chelsea career and then went on to win the Europa League a year later.

Last season Cahill won a domestic double with the Blues and lifted the Capital One Cup and Premier League.

He was also a part of the country’s meanest defence alongside Terry, Ivanovic and Azpilicueta and was also voted into the Premier League PFA Team of the Year in both 2013/14 and 2014/15.

The England vice-captain has helped his country qualify for next summer’s European Championships and is now focused on helping Chelsea turn their season around.