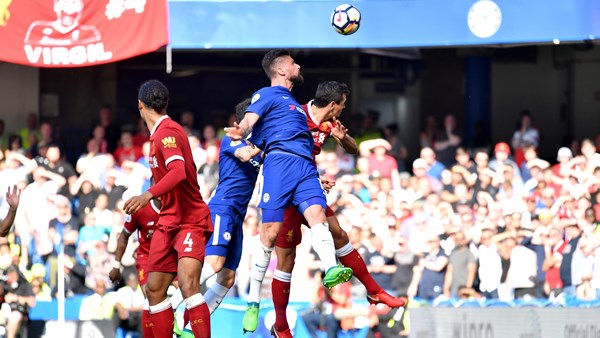 Chelsea’s win over Liverpool on Sunday ensured that the race for a Premier League top-four finish goes down to the final day of the campaign, courtesy of an Olivier Giroud goal.

The Blues centre forward headed home Victor Moses’ cross in the first half to separate the sides and Antonio Conte’s men held on for a valuable three points.

While Liverpool may have one eye on the upcoming Champions League final against Real Madrid later this month, Jurgen Klopp’s men could yet finish outside of the top four.

With Chelsea on the march, here are three observations from the game.

Chelsea’s move to sell Nemanja Matic to Manchester United last summer and replace him with Tiemoue Bakayoko was questioned in some corners and the criticism of the London outfit’s decision has gotten louder as the season has progressed.

The former Monaco central midfielder has had a tumultuous first campaign in English football and struggled to make a lasting impression at Stamford Bridge.

However, Bakayoko’s energy and aggression were key to Chelsea winning the midfield battle against Liverpool and, alongside N’Golo Kante and Cesc Fabregas, the enforcer impressed.

A second season at the Blues could be needed for Bakayoko to get to his best but the Blues fans will have been encouraged from what they saw of him on Sunday.

Klopp rightly fielded a Liverpool starting XI to try and win the game and the Reds were unlucky in some regard not to leave London with at least a point.

However, despite the potency of the Merseysiders’ top team, the required strength in depth to rotate is not there for the Anfield boss.

Looking at the Liverpool bench on Sunday, Klopp did not have game changers to call on when a Plan B was needed.

While Chelsea were able to introduce Willian, Davide Zappacosta and Pedro, Liverpool turned to Jordan Henderson, Alberto Moreno and Dominic Solanke for inspiration.

Although there are a number of talented youngsters on the fringes of the Reds side, more quality across the pitch will be needed this summer for the Merseysiders to put forward a Premier League title challenge next season.

Having won their last five games in all competitions, Chelsea are finishing the season strongly while Liverpool and Tottenham in the positions ahead of them stutter.

Although the West London side could still finish in the top four, the Blues are relying on other results going their way to qualify for the Champions League.

Despite Chelsea losing to both Manchester sides and Tottenham since the turn of the year, defeats to Bournemouth and Watford in quick succession in early February will be specifically galling.

The Blues looked like a Champions League side in their win over Liverpool on Sunday but their recent improvement will have come too late if the sides above them win their remaining games – which look straight forward on paper.