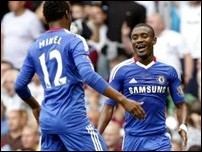 Prior to the employment of Carlo Ancelotti several people, like Sir Alex Ferguson, were dooming Chelsea because of their ageing squad.

It is certainly true that when Ancelotti inherited his team the best and most influential players were nearing, or were already, around the age of 30. At the same time we were beginning to get excited about some of the young players coming through – this excitement has only grown as Ancelotti has given them more opportunity.

The big question mark over the squad concerned the players who weren’t approaching thirty but weren’t young enough to be exciting prospects either. My big concern was the hand-over from the older players to the younger players. Even with Ancelotti’s emphasis on playing promising players in the first team it was difficult to see how Daniel Sturridge was going to take Drogba’s role as soon as he left/retired, or how the team could be the same when Patrick van Aanholt is forced into Ashley Cole’s position due to injury.

It seemed as though it could have gone one of two ways. Either the bigger players would gradually have to retire and be replaced by the young squad members, who would then feel the pressure and not play to their full potential and then 1) Chelsea would decline as a team or 2) Chelsea would scrap their new-found policies and buy a few world class players to fill the gap. Neither outcome would be satisfying.

This is no longer a concern for me because Ancelotti has gotten the best out of the, crucial, mid-20s members of the team. When Ancelotti arrived none of these players were, to put it lightly, fan favourites. John Obi Mikel (23) was quite regularly playing but was very prone to mistakes and could misplace the simplest of passes. Salomon Kalou (25) was erratic – he was fantastic at times, but mostly just disappointing. Finally, Branoslav Ivanovic (26) was a hero for scoring 2 goals at Anfield but it seemed set to be just a 15-minutes-of-fame type scenario with him.

Since the arrival of Ancelotti these three players have really improved and two (Mikel and Ivanovic) have become first-team regulars. Kalou looked particularly impressive towards the end of last season and looked to have finally found some consistency. He has started this season well as well having scored four goals in 2 Premier League starts and 3 substitute appearances, before getting injured. He is only kept out of the team by three of the best forward players in the world, and, in nearly any other team in the country, he would be in the starting line-up.

Ancelotti has also reinforced this crucial age-group with the signings of Zhirkov (27) and Ramires (23). These players have had difficult starts to their Chelsea careers; but it does take a lot to go from being first-team regulars to fighting for places with the likes of Frank Lampard, Ashley Cole and Florent Malouda. Both have undoubted ability and will, when they get their chances and have fully adapted to the Premier League, prove to be really good players for Chelsea.

Abilities aside, these 5 players will prove crucial in the near future of the club – as long as they do not transfer away. They are all play at an extremely high standard and, when not playing, they are being kept out of the side by the best players in the world. As players like Lampard, Drogba and Anelka get a bit older; these players will start to get more and more chances. Meanwhile, as the younger players start to get more games, these players will be some of the more experienced players to guide them through the pressure of living up to superstar names.

They may remain less spectacular than some of the older stars and the young talents but they will be involved with both, and will probably play a crucial role in the transformation of the the team from old, to young. The important thing for Chelsea is to keep these players, or else risk a loss of our new policy or a decline in ambitions of the club.