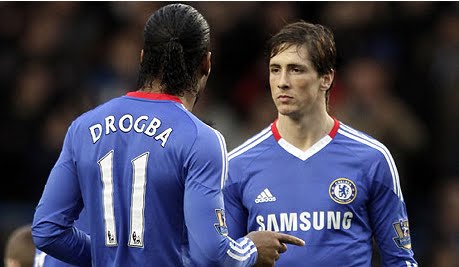 Fernando Torres has now gone nine Chelsea appearances without scoring a single goal. He has appeared three times in the Champions League and made six appearances in the Premiership where he has started all but one league game. So why is El Nino failing to live up to his prolific goal scoring reputation?

Just like Didier Drogba, Torres has been used to playing within a set-up where he is the primary figure and is almost always the first choice. Since arriving in the Premiership, Torres has scored 65 times and accompanied with his impressive performances throughout the qualification for Euro 2008 and South Africa 2010, there is no doubt Fernando is one of the top front men in the world.

During Torres’s time at Anfield, he was paired with a variety of partners but Torres has usually benefited when he receives the most service, playing as a lone striker. It is no secret that Torres was in his best form when he worked together with Steven Gerrard. With Stevie’s influential presence and precision passing they quickly became acquainted with each others game and began reading off one and others movement.

Unfortunately, both Torres and Drogba play through the middle and although their styles are very different, the positions they take up and want to make are very similar. They both enjoy playing along the back line and playing them together could lead them to cramp each other’s space.

Therefore, since Fernando’s arrival, Ancellotti has played around with different formations but has yet to find a suitable match to maximize their number 9’s ability.

One example is the 2-1 win over Manchester United, where Ancellotti opted for a 4-4-2 in which Torres partnered Anelka. Despite Chelsea taking the three points, the forwards struggled throughout the game, failing to gain any understanding off each other and the 4-4-2 formation only served to limit Frank Lampard from pushing forward without having the security of two holding midfielders behind him. Like Gerrard, you get the best out of Frank when he is playing as a ‘second striker’. However, when he sits in a 4-4-2 midfield role, he is restricted to delicately balancing out his attacking and defensive duties.

Furthermore, Ancellotti has had a dilemma when he has wished to play a more attacking formation with 4-3-2-1, which is how Chelsea went out against Fulham. Having two attacking wingers is productive if you have the suitable attacking players, who can take up that role, but Torres and Anelka cannot play on the wing and Drogba has never expressed his delight at playing in that position either.

So here comes the million pound question, what is the best attacking formation for Chelsea?

For a start Ancellotti should not be trying to force his three strikers to play together simple because he feels he cannot afford to leave two of them out. History has shown us that Fernando Torres is most effective as a lone striker and receiving 100% of the service. You increase your yield from Torres further if you play with an attacking midfielder who acts the second striker; Steven Gerrard played this role for Liverpool. Moving to Chelsea has given Torres the chance to play a similar role, with Lampard acting as second striker.  However, Ancellotti has yet to try this formation out. The reason for this is two-fold. One, a total overhaul of a system that has been so effective for Chelsea would be shortsighted and dangerous, and two, Ancellotti simple cannot afford so late on in the season to be dropping two of his three strikers.

Ultimately a team cannot be changed for one player, but then again if Drogba and Anelka were to leave, Torres would become the focal point of Chelsea’s attack leaving him to play as a lone striker.

But if Drogba sticks around for another season, they must either adapt to their game and learn to play together or Carlo Ancellotti must take the gamble and start playing Torres own his own.

Any critic will tell you Fernando Torres will score for Chelsea and he will retain his devastating form that destroyed Premier League defences in his initial seasons in the Premiership. When this will happen is dependent on where Torres is played; whether with Lampard as a second striker or with Drogba. If it is the latter, it’s crucial they begin to play together otherwise Chelsea will continue to struggle with finding a suitable formation through to the beginning of 2011-2012 season.

If you were Ancelotti, what formation would you choose?