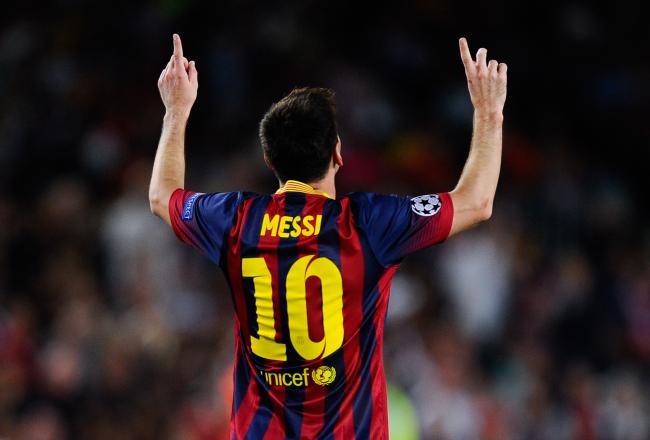 There is simply no par in world football when Lionel Messi is concerned, and when the Argentine played his 500th game for Barcelona yesterday, it offered us mortals a chance to turn back the pages of a wonderfully illustrious career of a modern day footballing God and once again gasp in awe at his achievements on the pitch.

Barcelona rode past Real Betis 4-0 at the Camp Nou last night in Messi’s 500th appearance for the club, a gift close to perfection for the perfect footballer ever. Messi has had a career full of silverware and records, and at 28, is set to carry on for many more years. Messi’s milestone 500th appearance for the Catalan club saw him notch his 425th goal for the club, a stat enough to quantify his importance to the club he joined as a 13-year-old.

Messi has now joined the ranks of Xavi, Carles Puyol, Andres Iniesta, Migueli and Victor Valdes in the elite group of players who have played 500 games for Barcelona, but la Pulga is arguably the greatest of them all. Even without considering the fact he is the only non-Spaniard in the above group, Messi’s influence in what has been the greatest period in Barcelona’s history arguably makes him the best player to wear the red and blue of the club.

Here are ten of the best Messi stats from his 500 games at the club, and an attempt to emphasise his importance to Barcelona over the years, as if it isn’t a known fact.

1. Messi has scored 425 goals in his 500 Barcelona appearances, giving him a rate of 0.85 goals per game. That’s like scoring 85 goals in 100 games, which is utterly phenomenal.

2. When Messi scores, Barcelona rarely lose. In total Messi has scored in 267 club matches. When he has done so, Barcelona have only lost on nine occasions (3.4 per cent).

3. Messi’s best goalscoring season came in 2011/12. The Argentina international topped La Liga’s scoring charts with 50 goals and netted 14 in the Champions League to also top those standings, eventually reaching a total of 73 strikes in all competitions.

4. Messi can score anywhere. La Pulga has scored 236 of his goals at Camp Nou, 174 of his strikes at away grounds and an additional 14 at neutral venues.

5. The 500 matches Messi has played have come under five coaches. He made the most appearances under Pep Guardiola (219) and the least under Gerardo Martino (46).

6. Messi has tasted victory in 350 of his 500 Barcelona games to date. He has enjoyed most success under current boss Luis Enrique, winning 77 percent of games (58 from 75) under the Asturian. His worst record was under compatriot Tata Martino (29 from 46, 63 percent).

9. As well as his goalscoring feats, Messi has also provided a total of 159 assists for team-mates during his 500 games.

10. Messi has enjoyed himself most at the home of rivals Real Madrid, scoring 12 goals at the Santiago Bernabeu. His second-most successful away venue is the Vicente Calderon – home to Atletico Madrid – where he has netted 11 times.

The diminutive Messi is set to bag his fifth Ballon d’Or in a few days, an unprecedented feat in football. The fact that Messi has transcended the limits of football during his career spanning 11 years makes it harder to believe he has still someway to go before hanging his illustrious boots. With his 500 game milestone, Messi has added another feather to his Barca cap. A true genius of the beautiful game, Messi is to be enjoyed till he lasts, and he has many more miles to travel.