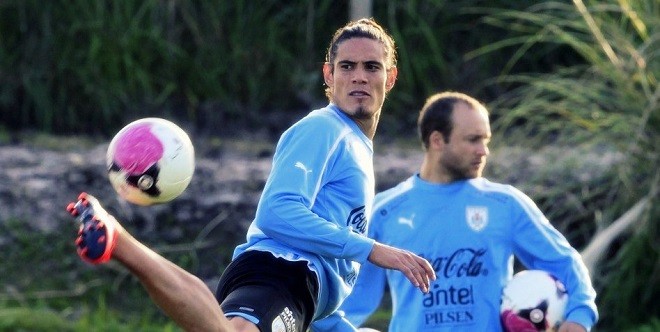 The Uruguay international, Edinson Cavani, is a hot target for top European teams like Chelsea, Real Madrid and Manchester City. But Madrid was ruled out when Cavani dropped the biggest hint that he’s ready for a move to England.

Cavani was the top scorer in Serie A last season with 29 goals in 34 matches. His prowess in front of goal is something that is attracting some of Europe’s big money spenders.

The massive buy-out clause has not made life easy for any of the European giants. Since Cavani has already said that working for Manuel Pellegrini or Jose Mourinho would be a great pleasure for him.

Cavani went on to comment on how he feels about La Liga and the Premier League. He said:

“I don’t know if La Liga football suits me. Spanish football is wonderful as everybody knows, you have more freedom.

“I don’t know what is going to happen.”

Cavani did not give a definite hint towards where his future lies but he has cast doubt over a move to Spain. I guess we will just have to wait and see if Roman Abramovich can outbid the Arabs or not.

It is also rumoured that Chelsea made a €40 million (£34.1m) plus Fernando Torres bid for the Uruguayan international but it was rejected by Napoli. The deal will be worth €64 million (£54m) making it a Premier League record if it had gone through.

At the moment though, Edinson Cavani has his eyes set on the Confederations Cup. Cavani will have the oppportunity to play against the likes of Brazil, Spain, Mexico and Italy among others – a chance for him to further impress the potential suitors.

“I don’t know if Spain are the favourites. What I know is that they are a very good team, they are world champions.

“And for us to get on to the pitch and be part of these kinds of games will be something to be proud of.”

Uruguay’s run to the fourth position in the 2010 World Cup is now a distant memory. Three years on and Oscar Tabarez’s side find themselves on 19th in the FIFA World Rankings. They are also five points away from automatic qualification to the 2014 World Cup.

The Confederations Cup gives them an opportunity to string a few good performances and gain some momentum before they can go on to secure a World Cup berth.

Cavani, however, believes that there are others who have a point to prove in this tournament as they are struggling for form as well. He said:

“They are football powers but they have to show that they have the level to win this cup.”

Uruguay’s hopes to attain any glory lies on Cavani and Liverpool ace Luis Suarez and if they can replicate their club forms in Brazil.