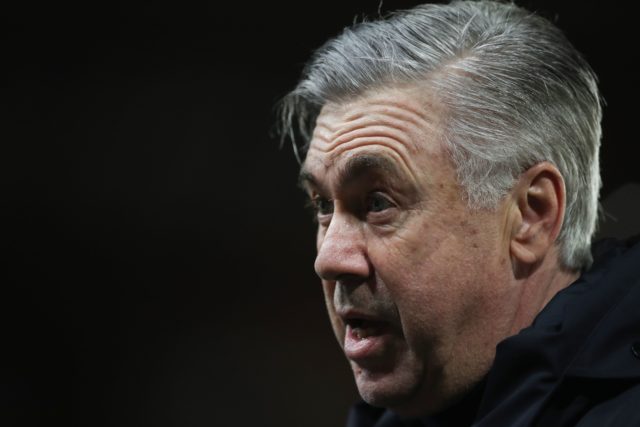 Carlo Ancelotti has confirmed in his press conference today that striker Dominic Calvert-Lewin will miss the clash against Manchester City on Wednesday.

However, Ancelotti has confirmed that there could be better news ahead for the striker.

Good news for the Toffees

James Rodriguez picked up a knock in the last match and was substituted in the second half, but he may return against City.

Ancelotti on James: "It is the intensity of the Premier League, there is a lot of contact. He suffered a contact against Fulham but it was a normal contact and he is available to play tomorrow."

Everton also missed Jordan Pickford in recent games through injury, but the England goalkeeper is on the comeback trail.

Allan, the summer signing from Napoli, has been out of action since Everton’s 2-0 over Leicester in mid-December.

The 30-year-old is also back in training and could be back against City.

Dominic Calvert-Lewin will miss tomorrow's game with Manchester City. Allan is fit and in contention to play

The Italian has insisted that January signing Josh King needs time to settle with the club, but he is happy with his contribution so far.

"His fitness level is ok because he trained normally at Bournemouth. He has to adapt to the team tactically but I'm happy with what he's doing. He is working hard and gives us all his quality & belief. For sure he's going to start in the future."

The Toffees have won four, drawn two and lost five at home this season. Ancelotti is keen to find a solution to their problems at Goodison.

"When we are forced to defend, we did well. When we decided to play an open game, it was difficult to find balance."

Ancelotti on home form: "We have to improve. We are still in a good position in the table, not because of what we did at home. At home it has not been good enough. The best games we played at home were against top teams."

Everton are only five points behind fourth-placed Chelsea, and their next two games are very crucial. The Toffees face Manchester City at home and then away to Liverpool, and Ancelotti has backed his team to shine in both matches.

Ancelotti: "I have confidence these next two games will go well for us."

Without giving too much information about his tactical plans, the Italian has hinted where Everton must improve against City.