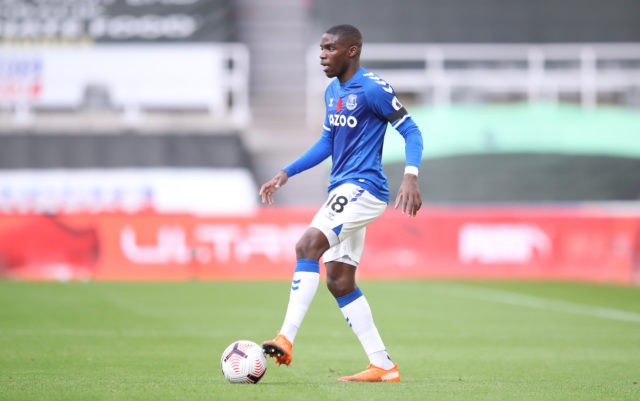 Everton boss Carlo Ancelotti has claimed that he is impressed with young left-back Niels Nkounkou, but he still cannot include him in the first team due to tactical reasons.

With Everton currently without first-choice left-back Lucas Digne through injury, it was expected that Ancelotti would give more opportunities to young Nkounkou.

However, the Italian has claimed that he “prefers more experienced players” at the moment.

The 20-year-old has not made the Blues’ matchday squad in any of the three games since Digne picked up an ankle injury.

The Everton boss has used Ben Godfrey – who is a natural centre-back – in the left-back role against Burnley and Chelsea. Ancelotti has now confirmed that he will continue to use Godfrey for the time being.

Ancelotti has said that he is impressed with Nkounkou’s application in training, adding that the player is improving at the club.

He has claimed that the Frenchman’s omission is not down to any disciplinary issue, rather the decision has been taken on his lack of experience.

“No, no. Absolutely not. It is a tactical decision,” Ancelotti said to Liverpool Echo.

“Unfortunately, I think he did well and is doing well. To be in the squad, to be in the team he needs more experience.

“For him, it is the first year at a top-level as a professional, he has to improve, he is improving.

“There’s no doubt about his professionalism. He is really focused in training, he’s going to play but in this moment I prefer more experienced players.”

It seems the youngster will wait for his opportunity.

He is a highly-rated young talent, and Ancelotti seems impressed with his professionalism.

There is no doubt about his potential, and that he is expected to play at some point this season.

Godfrey has done well in the absence of Digne, and Ancelotti has said that the 22-year-old has surprised him with his qualities.

Everton will face Leicester City in the Premier League on Wednesday at the King Power Stadium. The Toffees are heading into this game on the back of a 1-0 win against Chelsea, and Ancelotti is expecting to pick up another positive result.