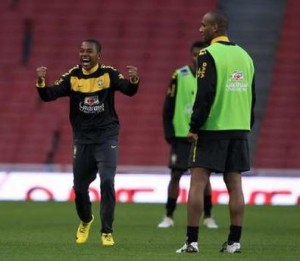 Brazil, one of the favorites to win the 2010 World Cup in South Africa, will begin their warm-up to the tournament with a friendly match against the Republic Of Ireland.

The Republic of Ireland will play their first match since the infamous Thierry Henry handball. The Irish were unable to win the play-off and missed out on the World Cup Finals because the match. Brazil qualified first in the CONMEBOL table but wasn’t dominating by any stretch. They were first in the table but this included 7 draws and less wins than 2nd place Chile and 3rd place Paraguay.

Brazil have as much talent as any team and will have Kaka, Robinho, Dani Alves, Julio Cesar, Maicon, and Adriano all available for the match. There are no players on clubs from the UK and most play in the Italian Serie A. Ireland can’t match the talent of the Brazilians but do have quality players who are capable of making the the mat competitive. Goalkeeper Shay Given has prove to be quality along with defender Richard Dunne, midfielder Damien Duff, and striker Robbie Keane.

The match will take place at the Emirates which is an advantage for Ireland. Almost all their players are already playing in England so the amount of travel will be limited and it should be a home match atmosphere. Even with these benefits, the Irish have a tough test to get any result from the match. Brazil has experience and talent that very few countries can match. Even if the get down 0-1 or 0-2 in the first half, the Brazilians are capable of scoring 3 or more goals in any half.

Given will have to play a terrific match to keep his team in the match. There probably won’t be many chances for the Irish as Brazil will likely control most of the possession and chances. Ireland will need to rely on counterattacking which was used effectively by the USA in last summer’s Confederations Cup. While its a friendly with no trophy at stake, it should be an entertaining match between two countries with rich football histories.

You can watch Brazil v Ireland live online as well as dozens of other International and World Cup games. Read our live World Cup page for more details.